Man of Aran (January 24 at 1:30 at the Cleveland Museum of Art Morley Lecture Hall) 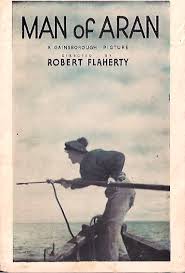 Long before reality-TV made you wonder what was real and what was scripted, the first name- brand documentary filmmaker, Robert Flaherty, was way ahead of the Kardashians in terms of artful artifice.  I like to think that Flaherty's films will still be screened when the Jenner-Kardashian sideshow tent is closed and forgotten. But I’ve been wrong before.

The 1934 MAN OF ARAN is Flahertys famed, elemental view of the hardy inhabitants of Aran, a stormswept island off Ireland's west coast, sometimes romanticized as the UK equivalent of the literal ends of the Earth (ah, its not Cleveland after all, as so many have claimed) for its barren shores and harsh climate.

Flaherty, his wife and assistants spent years living here, researching and building their own film-processing lab. The feature is arguably more of a docu-drama than a documentary; the `family' at the center were unrelated islanders, carefully cast, and Flaherty avoided prosaic community activities like church, socializing and cattle-driving.

Instead, focus is tight on the Aranmen's battle with the pounding, roiling sea, as fishermen challenge the waves in "curragh" boats little larger than canoes while the women gather seaweed for compost in growing potatoes in the thin soil. For the the most breathtaking moment is the appearance of a giant basking-shark, a harmless plankton-eater but, as it sidles up to a young boy onscreen, as primordial as a Hollywood sea monster CGIed into existence for JURASSIC WORLD.


For his cameras, Flaherty persuaded his subjects to harpoon and catch the leviathans, a hunt that had not been undertaken in decades, another instance of stretching the cinematic truth a bit that provided fuel to his detractors in later generations. Still, you can't say it isn't as transfixing as any Deadliest Catch highlight reel. The heavily-accented dialogue is often indistinct, blending in with the natural rhythm of surf and shore.


After its high-profile premiere the movie became a celebrated icon of Celtic life on the outskirts, viewings of it practically a ritual event in that rugged corner of the UK, as evoking a past that was lost even before Flaherty began to film it. Perhaps in Cleveland, someday, we will stagger out of our caves and thatched huts (economy, you know) once every year to go to the lone still-existing cinema to watch CAPTAIN AMERICA: THE WINTER SOLDIER for the same reason. -CC
(4 out of 4 stars)