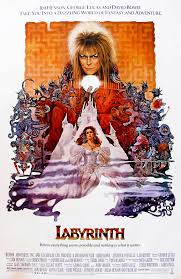 For a film that received wildly uneven critical reactions in its time - some critics were crazy about it, some thought it was an embarrassingly pretentious piece of pop-music/fairytale - the Muppet epic LABYRINTH ...probably still would receive wildly uneven critical reactions in this time. Probably for the same reasons (plus, not enough swag, bribes, prostitutes and drugs given by studio PR to the bought-off internet critics during the all-expenses-paid press junket).

For what it's worth, I am one of this film's admirers, and I've always wanted to write about it. Now it's in revival thanks to VIP cast member David Bowie tragically dying. I am sure his fans will blame me.

Before you gender-confused glam-rock types on heroin and/or nostalgic baby boomer yuppies come after me with your sharpened artificial fingernails and gold-plated pitchforks, listen to me: Bowie was not right-off-the-bat cast as Jareth the Goblin King in the fantasy. I have it on good authority a number of musical icons were under consideration for the role back in 1986, including Mick Jagger and Michael Jackson. I guess if you want to lynch anyone, it's director Jim Henson; HE'S the one you want! If it weren't for him, Bowie might still be alive today! Death to Jim Henson! Death to Jim Henson...oh, right, I forgot. (sigh)

The plot of LABYRINTH has been compared to everything from Alice in Wonderland (good call) to The Wizard of Oz (err...no), and it certainly has echoes of nearly all the fantasy-film properties to pass through Neil Gaiman's pen. A fetching young Jennifer Connelly plays Sarah, a modern teen girl steeped in medieval fantasy and lore (today she'd be cosplayer type). Sarah doesn't like babysitting her baby stepbrother Toby, so she verbally wishes that "goblins" take the tyke away.

In fact, there really are goblins in some sort of other dimension, and their cool-ominous king Jareth (Bowie) hears Sarah's words and grants her wish, taking away Toby (who only seems to be having great fun throughout) to his netherworld and planning to ultimately make a goblin out of him.

Sarah regrets her wish, and Jareth tells her she can regain Toby if she discovers Jareth's lair, perched in the center of an immense labyrinth. Sarah's explorations through the labyrinth bring her into contact with various puzzles, perils and semi-comical creatures (one, a giant called Ludo, inspired the rather neat rock band of the same name, I think). Some of the monsters are friendly, while others are under Jareth's control, conspiring to trick Sarah and make her Jareth's bride...or something.

By the time she finally confronts Jareth, an adventure-tested Sarah has the confidence to defy the Goblin King and prevail...or something. Even I will admit that it does feel like the filmmakers (with script input from Monty Python comic and medieval scholar Terry Jones) just didn't seem to know how to end the thing themselves either.

So best just shut up and enjoy the ride, as LABYRINTH bursts with playful weirdness and creativity that is all the more impressive for pushing the limits of the Henson Creature Shop's technology. And if the Henson team made any heavy use of CGI besides the opening credits and the MC-Escher climax in a gravity-defying series of castle staircases, I don't know it. There's everything from the most sophisticated Muppets that animatronics technology could pull off to a wall of gloved hands that merely use miming gestures to form human faces. This is puppetry and imagination at its finest. No wonder the plot doesn't quite keep up.

And, while Bowie's effectiveness has been debated ever since, I think it's safe to say his otherworldly demeanor puts this in the "win" column for the multimedia performer's scattered film-acting roles. The songs he contributed, if not classics, were darn fun for children of the 1980s and still hold up.

Don't ask me if Glenn Frey was considered to ever play Jareth. Or, in a new digital remake with a gender change, Amy Winehouse. (3 1/4 out of 4 stars)
Posted by Charles Cassady Jr. at 8:15 PM