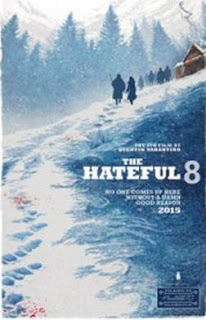 A group of rough and rugged men and one female prisoner on her way to be hanged get trapped in a blizzard and make plans to stay in a tavern for three days in Quentin Tarrantino’s latest film, THE HATEFUL EIGHT. Most of the characters don’t much like any of the others, and fragile alliances can change quickly with just the right story or revelation. It’s going to be a tense, and ultimately bloody, layover.

It wouldn’t quite be fair to say that THE HATEFUL EIGHT is an uncredited remake of John Carpenter’s THE THING, but it certainly has some parallels to that movie. A small group of characters are trapped together during a blizzard. None of them can trust each other. And at least one of them is looking to take out some or all of the others through surreptitious means if possible, blatant ones if necessary. Only unlike THE THING, there’s no blood test to reveal who the bad guys are. And if there was, the whole cast would likely come up positive.

Of course you’ve also got the star of THE THING, Kurt Russell, playing bounty hunter John Ruth, one of the titular EIGHT. And the soundtrack by Ennio Morricone, while largely consisting of new music, includes a few cues originally written for Carpenter’s film that went unused until now. There are other similarities, but to mention some of them would amount to spoilers.

The other major influence on the plot seems to be the sort of closed room “whodunit” that Agatha Christie specialized in. When a poisoning takes place at the film’s halfway point, Samuel L. Jackson’s Major Marquis Warren turns into something of a profanity spewing Miss Marple as he seeks to deduce who the poisoner is. There’s also some Hitchcockian suspense leading up to the poisoning, as the audience knows the coffee has been tampered with, but the characters (except for the poisoner, of course, and at least one other character) do not.

This is a film very much built on artifice and playing games with the audience. There are touches that make sure you never forget you’re watching a movie: a musical overture and intermission, just like the epics of yore, and expository narration by Tarantino himself at two important points in the film, to name the most overt.

It also seems as if some of the cast are intentionally channeling other actors – Tim Roth comes across more like Christoph Waltz, and Demián Bichir plays a character named “Bob” in a way that couldn’t help but make me think of DeNiro. Which kind of works, because every character in the film is putting on a performance of some sort. You never know how much of what any of them say is true.

Lying is, in fact, a major theme of the film. Even the title is a misdirection, with the number of hateful individuals who figure into the main plot being at least nine, and arguably ten.

It doesn’t quite connect on an emotional level the way the best of Tarantino’s films do, but as a playful filmmaking exercise it’s entertaining while still effectively conveying its themes. Of course the usual caveats that accompany any Tarantino film apply here: it’s full of graphic violence, general brutality, copious profanity, and racial slurs.

And there’s an awful lot of abuse heaped upon Jennifer Jason Leigh’s Daisy Domergue which some might see as misogynistic. Which it is, within the story. The male characters don’t like each other, but they really don’t like Daisy.

But depicting something isn’t the same as endorsing it. If anything this is a film that, rather than glorifying hate of any kind, shows just how ugly and destructive it can be. And it does so while still being hugely entertaining, and occasionally even laugh out loud funny. 3 1/2 out of 4 stars.
Posted by Bob Ignizio at 12:01 AM