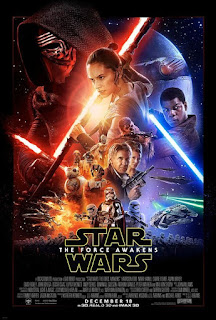 By now it’s a pretty safe bet that anyone reading this has either seen STAR WARS EPISODE VII: THE FORCE AWAKENS, or at the very least is aware that the film exists, that it is a continuation of the STAR WARS series that takes place some decades after RETURN OF THE JEDI, and that most people who have seen it have enjoyed it. You probably also know that several characters from Episodes IV through VI return for this installment, while several new characters are introduced to carry the torch going forward. And outside of the spoilers that critics have been asked not to mention, you probably know most of the plot details. So no need to rehash that here, in this somewhat late review.

Instead, let’s just jump right into a critique of the film.

Overall, THE FORCE AWAKENS is a satisfying film. One can never say with certainty how anyone other than him or herself will react to a film, but so far it does seem as though the vast majority of STAR WARS fans are happy with what they got. Certainly this reviewer was. That said, the film is not without issues.

The chief problem with THE FORCE AWAKENS is also one of its chief assets; it’s familiarity. Not only are old characters back, but old plotlines, as well. In its broad strokes, this is essentially a retread of the very first STAR WARS, the film later subtitled EPISODE IV: A NEW HOPE. Actually, not just in its broad strokes. Very few plot points in THE FORCE AWAKENS are without an antecedent in the earlier film. As Joe Bob Briggs always said, the secret to making a good sequel is making the exact same movie over again. Hey, it worked for FRIDAY THE 13TH.

Even if THE FORCE AWAKENS is a textbook example of script recycling, it nonetheless proves highly entertaining. That’s due in no small part to the new characters and the actors playing them. Daisy Ridley, John Boyega, and Oscar Isaac make fine new heroes for the audience to root for, and Adam Driver gives us a more emotionally complex and sympathetic villain that Darth Vader was (at least when audiences first met him in A NEW HOPE). As for the old cast, Harrison Ford’s Han Solo is really the only one who plays a major role, but it’s everything fans could have hoped for. Ford even seems like he wanted to be there, something that can’t be said about a lot of his film roles in the last few decades. But yes, Princess Leia (Carrie Fisher), Chewbacca (Peter Mayhew), C3PO (Anthony Daniels), R2D2 (Kenny Baker), and even Luke Skywalker (Mark Hammil) are present in varying degrees, too.

Of course, the film also makes considerable use of special effects and delivers a number of thrilling action scenes. We’d expect no less. Thankfully, it’s not the mind numbing overkill of the prequels in this regard, though. Director J. J. Abrams paces his film well, giving us plenty of character development and plot between the space battles and lightsaber fights.

If you’ve never been a STAR WARS fan up until now, this isn’t going to change your mind. However, if you’re like me (and a good many others) and felt disappointed by the prequels and George Lucas’ incessant tinkering with Episodes IV through VI, this is a welcome return to the “lived in universe” feel and classic storytelling that made us fans in the first place. There’s no way it can have the same impact that seeing the original STAR WARS in a theater in 1977 when I was a mere 7 years old did, but on its own terms it’s pretty damn entertaining. 3 out of 4 stars.
Posted by Bob Ignizio at 12:00 AM