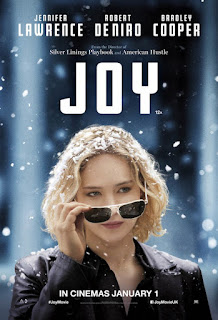 Back in the '90s, I became addicted to home shopping TV channels. In hindsight it seems tacky, but as an over-thirty law student under crushing pressure, I found solace in the patter of the smooth, charismatic hosts hawking gold jewelry, fake diamonds (“Diamonique”), clothes and household gadgets, each piece of merchandise flattered by star-filtered lights and the caresses of the well-manicured presenters. I came to know the hosts and their stories — witty New York-bred Kathy Levine; Judy Crowell, briefly married to a rakish fellow host, who asked her for a divorce just before airtime; Lisa Mason, fashion-model gorgeous but charmingly self-effacing; David Venable, the handsome ex-news anchor whose Southern charm could coax the bark off a Magnolia tree.


It was not unlike watching a soap opera, an analogy made explicit in JOY, David O. Russell's unlikely comedy-drama. The movie re-creates, amusingly and with the help of actual soap stars (Susan Lucci, Donna Mills), the ersatz world and melodramatic acting of the daytime soaps that are a fixation of Terry (played by Virginia Madsen), the title character's mother.

The most unlikely thing about JOY is its inspiration: the Miracle Mop, as mundane a subject as can be imagined. It's based on the biography of Joy Mangano, the Long Island inventor and entrepreneur who launched an empire by selling her Miracle Mop and other household products on QVC and Home Shopping Network. (Mangano is credited as an executive producer.) Russell, who wrote and directed, has developed a specialty in swirling stories of family conflict — THE FIGHTER, SILVER LININGS PLAYBOOK — deployed with fast-talking screwball energy. From Joy Mangano's ragmops-to-riches story, Russell has created a pulsing multi-generational Horatio Alger fable that, like its title, is well suited to the season.
Jennifer Lawrence, who won an Academy Award for her performance in SILVER LININGS PLAYBOOK, has become Russell's muse (despite reports of on-set conflict, the kind that always accompany Russell). She fiercely seizes the role of the hard-working, determined single mom who overcomes daunting obstacles. Her face shiny, her clothes stained and her hands cut and bleeding, she's a female Invictus, bloodied but unbowed, mistress of her fate.
Joy is the steady center around whom chaos swirls, known in her weirdo family as “Joy the Doer.” Her mom spends all her time in bed, watching soaps. Rudy, her dad (Robert DeNiro, another Russell stalwart), who runs a garage, has just been dropped off by his latest wife, who can't stand him anymore. Joy's ex-husband Tony (Edgar Ramirez), a Venezuelan aspiring lounge singer, lives in her basement, where he rehearses with a standup microphone. She's abused by rude customers at her job at an airport counter, and her half-sister Peggy (Elisabeth Röhm) bad-mouths her to her kids. Money is short, and the plumbing, among other things in her house, needs fixing.
We get glimpses of Joy's past, her lonely girlhood ameliorated by one best friend, Jackie (played as an adult by Orange Is the New Black's Dascha Polenco), and a prodigious talent for invention. “She rejoiced in making things,” we are told by Grandma Mimi (the great Diane Ladd), who narrates the movie intermittently. Mimi is Joy's guardian angel, the only sane family member, and the one who believes in Joy's special destiny. She reassures young Joy (Isabella Crovetti-Cramp): “You are going to grow up to be a strong, smart woman.”
Joy is a disappointed drudge, an aging high school valedictorian whose ambitions were dashed, along with a college scholarship, by her parents' divorce. The reappearance of Dad in the house brings on a screaming match with his bedbound ex-wife Terry: “You're like a gas leak, killing us all!” ”You're the creature from the Black Lagoon!” We are firmly in David O. Russell territory now, seatbelts clicked for a bumpy but entertaining ride.
The movie is set in the 1990s, when looking for love via phone dating (900 numbers) was a thing. That's how Rudy meets his newest love, the wealthy, Italian-born widow Trudy (Isabella Rossellini, still stunning). Some red wine is spilled during an awkward family outing on the teakwood deck of Trudy's prized 35-foot sailboat, and Joy must clean it up. Hands bloodied by broken glass, Joy is inspired to to create a better cotton mop. With her young daughter's help, she builds a prototype, with a plastic handle and 300 feet of continuous cotton loops, and approaches Trudy to invest in her plan to manufacture and sell the mops. Trudy is a tough customer, and doubts Joy's ability to succeed.
Joy's rocky journey takes her to QVC (“stands for quality, value and convenience”), where head of programming Neil (Bradley Cooper, somewhat awkwardly shoehorned into the movie) guides her in the nuances on selling on TV. Russell portrays the TV shopping world with a hokey, fake glamour that isn't particularly realistic. Oh, here's Joan Rivers, doyenne of costume bumblebee brooches, portrayed by her daughter, Melissa. Here's a presentation of big-shouldered evening gowns inspired by TV's “Dynasty” and “Falcoln Crest.” Most absurdly, there's an egomaniacal QVC host (Bates Wilder), who has no clue how to sell Joy's mop and admits it on the air (“We have no calls”). Joy fights for the chance to appear on the air herself, and when she does, Miracle Mop sales skyrocket.
There follow the challenges of a double-crossing factory, Joy's jealous half-sister's machinations, a second mortgage, bankruptcy and other stumbling blocks on the way to Joy's ultimate success which, when it comes, offers little emotional payoff. The Russell films that have worked best were tinged with tragedy, setting crazy dysfuncational-family comedy against grave subjects — brutal prizefighting and drug addiction in THE FIGHTER, psychiatric illness in SILVER LININGS PLAYBOOK, Congressional corruption in AMERICAN HUSTLE. JOY has a lot of frantic activity, but the stakes never feel particularly high. The performances are brilliant, the energy is infectious and the classic-rock soundtrack is fantastic. So does it matter that it's about a woman and her mop? I think it does. 3 out of 4 stars.
Posted by Pamela Zoslov at 1:15 AM