In the Basement (December 10th and 12th at the Cleveland Cinematheque)


[IN THE BASEMENT screens Thursday December 10th at 8:40 pm and Sunday December 12th at 8:20 pm at the Cleveland Cinematheque.] 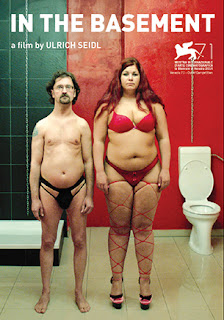 Basements are often seen as symbolizing the unconscious, or the things we try to hide away. Based on how the subjects in Ulrich Seidl’s IN THE BASEMENT utilize theirs, it’s not hard to see why. This film, ostensibly a documentary, takes a look at what goes on underneath several homes in Austria. We meet a singer who runs a shooting gallery, an elderly woman who plays with creepy, lifelike baby dolls, a guy who collects Nazi memorabilia, and three different couples who go down below to get down, if you know what I mean, and I think you do. There’s also an older couple who just have a nice retro looking bar downstairs, but with their glassy, silent, and unblinking gaze they may be the oddest subjects in the whole film.

It's obvious not everything we see here is 100% true, and Seidl has admitted as much. And even when the stories themselves are true, Seidl is not in the least bit interested in presenting them in a naturalistic way. He and his cinematographer, Martin Gschlacht make sure that every shot is carefully composed like a work of art, usually with the subjects positioned in pleasingly symmetrical ways. However one wants to categorize the film, and whatever one thinks of it, it’s impossible to deny that it’s a visually arresting experience.

Not unlike some of Werner Herzog’s documentaries, which have also been known to play fast and loose with the format, Seidl approaches his film with an attitude that sometimes one must tell a lie in order to get to a bigger truth. And that truth is that, lurking just beneath the surface, his fellow countrymen and women all have their secrets, some darker than others. Not that such an observation need be confined to any one country. 3 ½ out of 4 stars.
Posted by Bob Ignizio at 12:00 AM