[HEART OF A DOG opens in Akron on Friday December 4th exclusively at the Nightlight Cinema.] 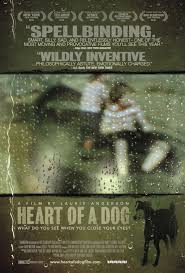 Most documentaries fall into one of two categories: either “you are there” cinema verite that exists in the moment, or “talking heads” type films that blend interviews with old film clips and photos. But there is a third, much rarer kind of documentary that aims for a more abstract, poetic approach. It should probably come as no surprise that when performance artist Laurie Anderson decided to direct a documentary, it would fall into this last category.

HEART OF A DOG is a film about loss. Overtly, Anderson talks about the loss of her mother, and of her dog, Lolabelle. The recent death of her husband, rock legend Lou Reed, isn’t addressed directly, yet it pervades the entire film.

You might think a movie dealing with so much death would be depressing, but it isn’t. Although Anderson’s grief is certainly a part of the film, she’s also philosophical about the losses she’s suffered, viewing them through the lens of her Buddhist beliefs.

The film also goes off on seemingly unrelated tangents, like Anderson’s view of how her city, New York, reacted in the wake of 9/11, and on a lighter note, Lolabelle’s unlikely career as a musician. It’s all tied together by Anderson’s deadpan narration delivered in the same soothing, hypnotic tone as her musical output.

On paper it might sound a bit too conceptual and artsy fartsy, and no doubt for some it will be just that. For most, though, I expect it will be accessible and emotionally moving in a way few films are. 4 out of 4 stars.
Posted by Bob Ignizio at 12:00 AM