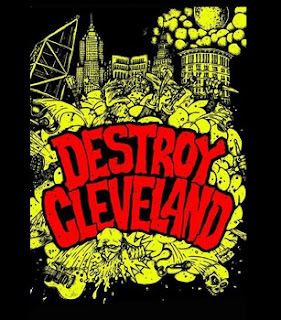 More or less picking up where Brad Warner’s documentary CLEVELAND’S SCREAMING left off, Matt Greenfield’s DESTROY CLEVELAND delves into the North Coast’s hardcore scene starting in the late eighties and going on into the nineties. Some of the bands are known only to locals who were there at the shows or heard them on college radio, a few made waves nationally, but traditional ideas of “success” in the music business don’t matter much to those in Cleveland’s underground music scene.

Rather than spending a lot of time showing footage of the bands playing, Greenfield opts for an oral history approach. Band members tell their stories, Greenfield and his editors shape it all into something reasonably cohesive, and a reasonable facsimile of Cleveland music history emerges.

A few notable bands are absent, and a little more about some of the venues where these bands played, notably Speak In Tongues, would have been nice. Greenfield himself has said as much, and plans to correct some of these omissions in a companion book he’s working on. Still, we have to assess the movie that we have here, and those omissions do hurt. I also could have done with some more performance footage. Especially given that a lot of these bands aren’t well known outside their small circle, it would have been nice to give the uninitiated more of a chance to hear what all the fuss was about. Still, overall this is a valuable document of an overlooked music scene, and those interested in the subject should check it out. The film has played one-nighters across the world and should be out on home video soon. You can keep up to date at this website. 2 ½ out of 4 stars.
Posted by Bob Ignizio at 12:00 AM