Breathe (December 3rd and 4th at the Cleveland Cinematheque) 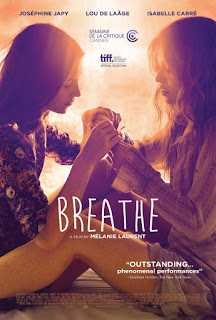 There have been any number of films about how difficult being a teenager can be, and the often prickly nature of youthful friendships, particularly between girls. BREATHE (aka Respire) is one of the best.

The film’s protagonist is Charlie (Joséphine Japy), a smart, reasonably popular seventeen year old. Things at home are a bit dysfunctional as Charlie’s parents often fight, but on the whole her life is pretty good. Then a new student arrives at school and attaches herself to Charlie, and everything changes.

Sarah (Lou de Laâge) comes across as more mature and sophisticated than Charlie, and as the bond between the two grows in intensity, it’s clear she’s the dominant half. Even early in their friendship when everything seems fine, there’s an uneasy tension lying between these two girls, and as that relationship becomes more and more symbiotic and unhealthy, the tension only grows.

The tipping point comes when Charlie follows Sarah home one night, not unlike a creepy stalker, and overhears something which throws everything Sarah has said about herself into question. And once Sarah realizes Charlie knows her secrets, she sets out to preemptively ruin her supposed friend’s reputation. And yet Charlie can’t stop herself from going back to her friend again, no matter how much abuse is heaped upon her. Parallels with her parents are clearly suggested.

As the film heads into its third act, viewers used to typical genre fare may well expect things to go all SINGLE WHITE FEMALE. Kinda, but not really. The film is both more mundane and more brutal than that, and its climax is a true shocker.

The performances by the film’s two leads are definitely a highlight, creating utterly believable character who remain so even as their relationship becomes increasingly disturbing and dangerous. And major kudos to director Mélanie Laurent for striking a perfect balance between a realistic portrait of teenage life and a potent thriller that borders on full blown horror territory. 4 out of 4 stars.
Posted by Bob Ignizio at 2:13 PM