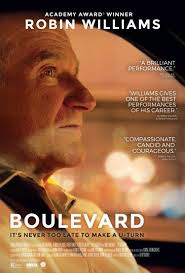 Still hard to believe that Robin Williams is dead. His face still surfaces in my archives, in ways most ironic and eerie – such as a 1998 Newsweek cover on mental health asking “Are We All Crazy?” That crossed my path recently, and I’m sure it’s not the most starting resurfacing most of our readers have beheld.
Not long afterwards, it fell to me to review the final film in which Williams starred before his shocking suicide, and no, it wasn’t one of those NIGHT AT THE MUSEUM sequels. In fact, even if Williams still were alive and well, it might have gone straight to video - with the exception of a likely token playdate at the Cleveland International Film Festival, under its gay-specialty content sub-category. Yes, one of those. Well, Williams did star, to great acclaim, in the mainstream queer-acceptance comedy THE BIRDCAGE. But this non-singing swan swan, BOULEVARD, directed by Dito Montiel, is no laughing matter.


Williams plays Nolan, a 60-year-old banker whose mild exterior and long, childless marriage to companionable spouse Joy (Kathy Baker) masks resentment over an unfulfilled existence. With the impending death of his father, insensible in a nursing home, Nolan seems to be in an especially sensitive state, even though his routine-bound exterior is so rigid that the character even resents the disruption posed by getting a major promotion and a raise at work. (Promotions? Raises? Work? Anybody remember those? I hear they used to be rather plentiful around here, sometimes)

After approving a home loan for a gay couple, Nolan impulsively drives through the town's red-light district and picks up a callow young hustler named Leo (Roberto Aguire). Oh, local-interest alert: Leo claims to be from Dayton. (BOULEVARD was filmed in Tennessee, FYI). Setting Leo up in a private love nest, Nolan begins a non-explicit affair with kid, an indulgence that can only lead - perhaps intentionally - to an unraveling/meltdown of Nolan's marriage and fairly colorless personal and professional life.

A promotion at work? Being stuck with Kathy Baker? Man, give me some of that colorless personal and professional life; you suddenly empowered LGBT types can keep your rainbow-colored flags and your fab-u-lous Volkswagens. Viewers familiar with the ups and downs and amazing tangents and dark corners of Robin Williams’ career might consider Montiel's film an interesting career bookend to the thematically similar 1986 Saul Bellow adaptation SEIZE THE DAY wherein Williams played a midlife-crisis casualty and proved his gift for solid, non-comedic characterizations. I’ve not seen SEIZE THE DAY; not many people did, despite critical raves. And, timing being everything, if BOULEVARD had come out (interesting choice of words) in 1986, it might have won the actors and director raves for their courage in confronting the touchy subject.

But, alas, times change, and for most onlookers today BOULEVARD, though expertly wrought by Williams & Co., is rather old news, dramatically speaking. In archives it rates as primarily a low-key footnote to Robin Williams’ career, given added melancholy gravitas by the fact that it arrived posthumously. (2 1/4 out of 4 stars)
Posted by Charles Cassady Jr. at 2:17 PM