Alvin and the Chipmunks: Road Chip 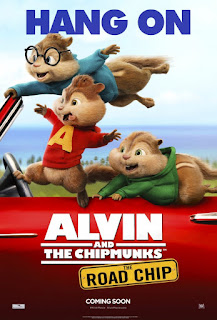 John Waters has a cameo in ALVIN AND THE CHIPMUNKS: ROAD CHIP. There’s even a PINK FLAMINGOS joke. So there’s that. For the most part, though, this movie is exactly the sort of uninspired product you’d expect from the fourth installment in a kid vid series that wasn’t anything to write home about to start with. It’s not good, but beating it up in a review hardly seems useful, either.

The plot is pretty typical stuff. Dave (Jason Lee) is getting serious with his girlfriend Shira (Kimberly Williams-Paisley). This doesn’t sit well with Dave’s pets/weird pseudo kids/meal tickets Alive (voice of Justin Long), Simon (voice of Matthew Gray Gubler), and Theodore (voice of Jesse McCartney), collectively known as The Chipmunks. Shira has a son of her own, Miles (Josh Green), who takes his daddy issues out on the pint sized singing rodents.

To stop their respective parents from tying the knot, Miles and the Munks agree to team up and sabotage Dave’s proposal. Problem is, Dave is in Miami, and the kids are in LA. And after an incident on a plane, they all land on the government “no fly” list, as well as incurring the wrath of air marshal Benson (Tony Hale). And so, they must set out over land, thus earning the film’s subtitle.

It all plays out exactly how you’d expect it to. Along the way there are plenty of juvenile slapstick antics and goddawful tween pop songs. Also more than a few examples of blatant product placement. Overall it’s mediocre but tolerable. My (almost) 5 year old son enjoyed it, but then he’s at that age where butt jokes, fart jokes, poop jokes, and chipmunks flying into people’s nuts jokes are about as funny as it gets. In other words, the movie satisfies its target audience, while understandably leaving anyone over the age of 14 nonplussed. I hope John Waters at least got a few bucks to put towards his next movie. 2 out of 4 stars
Posted by Bob Ignizio at 12:00 AM