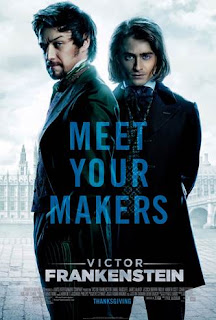 You can’t have Thanksgiving without a turkey (or a tofurkey if you’re vegetarian). Well, not only is VICTOR FRANKENSTEIN one prize turkey, it also comes with a bonus ham courtesy of James McAvoy’s scenery-chewing performance in the title role.  You want stuffing with that? Don’t worry, Chefs Paul McGuigan (director) and Max Landis (screenwriter) have stuffed their bird to overflowing with unnecessary secondary characters and subplots.

Like practically every movie adapted from well known source material these days, VICTOR FRANKENSTEIN goes to great pains to convince us that, while we may know this story, we don’t really know this story. In fact, narrator Daniel Radcliffe tells us as much right off the bat. And despite the film’s title, this really is his story.

Forced into indentured servitude as a clown for a low rent circus, Radcliffe’s hunchback secretly studies anatomy and medicine in his free time, eventually earning himself extra work as the troupe’s doctor. When not making a entertaining, practicing medicine without a license, or being used as a punching bag by the other members of the troupe, he pines for lovely aerialist Lorelei (Jessica Brown Findlay) from afar. When Lorelei has an accident, Victor Frankenstein (McAvoy) examines the girl and is certain she’s a goner. The hunchback, however, takes one look at her shoulder and figures out a way to save her life.

Impressed by this display of medical knowledge, Frankenstein helps the hunchback escape. Not without some collateral damage, though, as the troupe puts up one hell of a fight to hold on to a someone they’d been treating as useless garbage up until then in a ridiculously over the top and out of place action sequence.

Once safely away from their pursuers, Frankenstein immediately cures the hunchback’s hump by draining it (turns out it was an abscess), and gives the former clown a back brace and a name, Igor. Meanwhile, Back at the circus, Inspector Turpin (Andrew Scott) uses his Sherlockian observational skills to quickly determine what happened, and to link it to the theft of various animal body parts from the London Zoo. He also seems to instinctively know that whoever was responsible is involved in some activity that seeks to tamper in God’s domain, and since the good inspector is a cross-clutching religious zealot straight out of central casting, that gets his ire up.

And indeed, to the surprise of no one even remotely familiar with any version of this story, Frankenstein is involved in some rather outré experiments. This is still a Frankenstein movie, though, and whatever other nonsense it gets up to, it’s still a requirement that, at some point, someone sews together a creation out of various pieces-parts and brings it to life. There’s just an awful lot of that other nonsense; notably a subplot about another, even more amoral young doctor who provides Victor with the resources to carry out his experiments, all while hatching his own plot on how to use the results, that could easily have been jettisoned.

Eventually we do get a couple of monsters, the first made from the animal parts, and the latter your more traditional patchwork man (albeit with 4 lungs and 2 hearts in this version, amping up the silliness even more). If you were expecting a sympathetic creature like we’ve been accustomed to in nearly every other version of this tale, however, you’ll be sorely disappointed. If anything, once the monster is revived near the film’s climax, he displays no personality whatsoever. Instead, things play out in the same perfunctory and unsatisfying manner as the latter period Universal monster rallies like HOUSE OF FRANKENSTEIN, where the monster would get up at the end, lumber around smashing stuff for a few minutes,  maybe wrestle with the Wolfman, and then everything would conveniently blow up.

Radcliffe gives an earnest performance, and there’s some entertainment value in some of the film’s cheesier moments, but overall this is one bad movie. Odd that it’s bowing now rather than getting dumped into theaters in January or February (the traditional time of year when major studios dispose of their embarrassing garbage), but here it is, just in time for the holidays. You’re better off just staying home and having an extra slice of pumpkin pie. 2 out of 4 stars.
Posted by Bob Ignizio at 12:00 AM