(this review has some spoilers... for ALIEN 3) 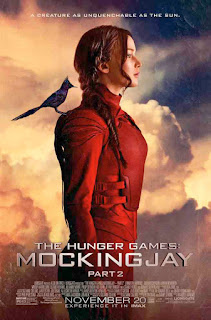 There’s a sequence midway through THE HUNGER GAMES: MOCKINGJAY – PART 2 in which Katniss Everdeen (Jennifer Lawrence) and a battalion of rebel soldiers splash through a claustrophobic network of underground tunnels in an attempt to evade lurking swarms of unseen monsters. Flashlight scopes mounted to futuristic assault weapons send narrow beams of light across the eerie dark. A motion detector noncommittally hums. Holy Hudson. Director Francis Lawrence is cribbing shot for shot from ALIENS. And I love it.

I mention this up front because, first of all, the scene erupts into one of the most thrilling, brutal action sequences of the entire franchise; also, in my review of THE HUNGER GAMES: MOCKINGJAY – PART 1, I half-jokingly compared a part featuring the rescue of a cat amid steam jets, spinning beacon lights and a portentous automated countdown to the penultimate setpiece of the original ALIEN. At the time, I was convinced I’d made the connection out of sheer ALIEN fanatic pareidolia. Now, I’m beginning to wonder…

Up until a pivotal scene around the 90-minute mark, MOCKINGJAY – PART 2 is darker and both more thoughtful and exciting than any of the previous HUNGER GAMES films. While the uneven, occasionally dull back 40 prevent this final installment from reaching the highs of CATCHING FIRE, it still satisfyingly rounds out a YA franchise that was never afraid to mix some freshman Poli-Sci into its Advanced Placement Archery.

After recovering from the brutal throttling she received at the hands of her Manchurian Candidated ex-lover, Peeta (Josh Hutcherson), Katniss, though given the choice to remain in District 13, enlists with the rebel army to assist in a full-on invasion of Panem’s corrupt capital. As uncompromising rebel leader Alma Coin (Julianne Moore) plans her political ascent, Katniss and a squad of familiar faces – Gale (Liam Hemsworth), Finnick (Sam Claflin), Cressida (Natalie Dormer), Pollux (Elden Henson) and  Castor (Wes Chatham) – march on President Snow’s mansion (Donald Sutherland).

But they find the city’s streets well-policed and lousy with traps. In place of the first two films’ perilous, booby-trapped arenas (and the third film’s underground exposition dungeon),  we get a city full of disfiguring oil, hidden flame cannons, disintegration beams and the aforementioned tunnel ghouls, along with truckloads of gun-toting, white-armored  Storm Troopers Peacekeepers.

Where its prequels often relied on the creativity of the gamemakers’ snares and mutants to elevate the action sequences, PART 2 leverages its conclusory nature to up both the desperation of its protagonists and the brutality of the forces against which they stand. For every deluge of cartoon gak, there’s a flurry of Peacekeeper bullets fired into a civilian crowd; for every I AM LEGEND-looking NPC mutt, an incendiary device exploding in a crowd full of familiar faces.

The fact that the rebellion's stakes have never felt higher means that scenes during which the rebels have just dragged themselves to safety after witnessing the brutal slaughter of their comrades and Gale and Peeta start whining about who hearts Katniss harder feel dumber and more disingenuous than ever.

Of course, it’s not just some heightened brutality and few major deaths that sell the film’s broader emotional impact. Jennifer Lawrence, incredible at humanizing the story’s over-sized conflict and themes, ratchets up her own intensity to match, turning borderline melodrama into believable pain through an endlessly expressive face and unflinching physical performance.

All that to say, if there was any intentional consideration given to evoking the ALIEN movies in the MOCKINGJAY films, it is, I think, because Katniss and Ripley have a lot in common.

Sure, they’re both powerful female protagonists.

They’re also both perpetual pawns - everyday women whose lives were continuously and insidiously manipulated by larger political powers - powers to whom they serve as both the best hopes and worst enemies.

They find themselves repeatedly wrenched from any space resembling a home, and from any person who contributed to that fleeting resemblance. And they make not only the decision to survive, but the choice to give themselves fully to the idea, and to the right, of survival.

But wait – I have one more big one (and this one probably isn’t intentional). In MOCKINGJAY - PART 2 and ALIEN 3, respectively, both characters make decisive, final moves that finally undermine their oppressors and, from a character standpoint, represent everything we, as fans, expect from our heroes. And both movies proceed to totally ruin the impact of these dope, heroic moves.

In the theatrical cut* of ALIEN 3, an alien bursts through Ripley’s chest just as she throws herself into a vat of molten lead. This cinematic choice to heap the final indignity of alien birth upon Ripley means that even if she had made the selfish choice to save her own life and have the alien extracted by Weyland-Yutani, she would have made it like, two steps with fake Bishop before her ribcage exploded.

In MOCKINGJAY – PART 2, well, obviously I’m not going to spoil the ending. Suffice it to say that while we get to see Katniss make the game’s final, thrilling move, we also have to watch the player collect all the pieces, fold up the board, put it back in the box, put the box back on the shelf and then sit on the sofa and flip through some magazines.

If THE HUNGER GAMES: MOCKINGJAY – PART 2’s greatest failing as a standalone film is a stumbling third act that pops a hammy just as the tension is at its greatest, leaving the movie to limp through an increasingly maudlin series of impact-dulling codas, it’s greatest success is in delivering on so many of the broader themes upon which the series was founded. (3 out of 4 Stars)