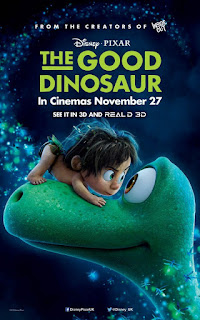 It isn’t so much that THE GOOD DINOSAUR is a bad movie. It’s just that, the CARS movies aside, we’ve come to expect better from Pixar.

Set in an alternate universe where dinosaurs never died out, THE GOOD DINOSAUR tells the story of Arlo (voiced by Raymond Ochoa), runt of the litter in a family of Apatosaurs (what folks my age grew up calling Brontosaursuses). The additional centuries have allowed the gigantic creatures to evidently evolve further along intellectually than evidence suggests they did on our earth, developing language skills and even figuring out how to farm and use tools.

Arlo’s family – dad Henry (Jeffrey Wright), mom Ida (Frances McDormand), brother Buck (Marcus Scribner), and sister Libby (Maleah Padilla) are subsistence farmers, growing corn on a small piece of land. They need to store up all they can for the winter if they’re going to survive, but something keeps eating their store. Not yet having proven himself like his siblings, it’s up to Arlo to handle catching the “critter” that has been eating the family’s corn, and then dispose of it. Permanently. The critter turns out to be a feral human child, Spot (voiced by Jack Bright). Arlo catches him easily in a trap, but is unable to follow through with exterminating the pest.

From here, it’s a pretty standard Disney plot as Arlo loses his father, then gets lost himself. Of course Spot turns out to be a valuable ally, helping Arlo survive the unfamiliar terrain they find themselves in. And there are various other dinos who come in and out of the lives of our two protagonists, some helpful, others not so much, as they try to find their way home.

It’s kind of like FINDING NEMO, but with intelligent dinosaurs that utilizes various tropes from Hollywood westerns. It works, more or less, but there’s just nothing about the script that’s particularly interesting. Even beyond the familiar plot, the characters never really come alive, and the gags are so-so at best. It's... okay. Kids who like dinosaurs (which is probably 90% of them) will probably enjoy this, but at the same time I don’t envision that many of them clamoring for Arlo plushies once its over. 2 ½ out of 4 stars.
Posted by Bob Ignizio at 12:00 AM