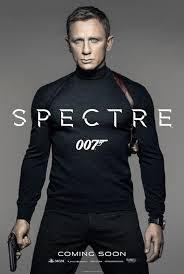 Even as a casual 007 fan, I know that every James Bond film is going to engage with, or, at the very least, be reflective of, three things: current action movie trends, looming cultural anxieties, and, of course, the decades-spanning mythology of Bond himself – his women, gadgets, cars, co-workers, cocktails, and license to kill.

By virtue of that latter list – an easy inventory of all tropes Bond – SPECTRE delivers. And then some. If Director Sam Mendes’ first 007 outing, the miraculous SKYFALL, was like the best box o’ donut holes you can buy at your local bakery, his follow-up is the Sam Club’s version,  bulky and excessive, bumping around inside inferior packaging… but still un-put-downably delicious.

SPECTRE begins with 007 (Daniel Craig) secretly pursuing a posthumous tip from the former M, leading him to a mysterious ring bearing the titular terrorist group’s cephalopodic logo and a single chance to infiltrate the shadowy collective.

Back at MI5, a nascent M (Ralph Fiennes) struggles to keep Bond on a leash as a new international security consortium, run by brazen millennial C (Andrew Scott), positions itself to shut down the 00 program in favor of global drone surveillance. With M distracted, Bond employs Moneypenny (Naomie Harris) and Q (Ben Whishaw) to work some covert sidekick shenanigans.

In service of the current Bond mythology, SPECTRE ties up some loose ends – the nefarious Mr. White (Jesper Christiensen) returns and some questions about Bond’s childhood are answered. It also introduces Dr. Madeleine Swann (Léya Seydoux), one of the more complex and capable women to ever enter Bond’s romantic orbit. (That isn’t saying too much, but Seydoux’s ability to vacillate between heart, smarts, and ass-kicking is as impressive as SPECTRE’s uncharacteristic restraint in her costuming.)

The big question leading up to SPECTRE’s release, of course, was how Mendes and writers John Logan, Neal Purvis, Robert Wade, and Jez Butterworth would choose to integrate such a virulently spoofed and classically pulpy element like Spectre into a CASINO ROYALE/QUANTUM OF SOLACE universe – a chromatically muted antithesis of the franchise’s Shumacher-esque Pierce Brosnan-helmed predecessors that has found James Bond riding the wake of fellow secret agent Jason Bourne into a grittier, more somber, geo-politically complex modernity.

The note-perfect casting of Cristoph Waltz as shadowy Spectre head, Franz Oberhauser, and the introduction of hulking, metallically enhanced assassin Hinx (GUARDIANS OF THE GALAXY’s Dave Bautista), an unlikely secret base, and some high-tech torture equipment provide the resounding answer: this is old school Bond.

Too bad the rest of the movie isn’t totally on board.

In order to match the theatrical scope of its villains, SPECTRE dials up its setpiece action, beginning with a beautiful, if needlessly indulgent, single-shot sequence in which Bond makes his way through the skeletal revelers of Mexico City's Day of the Dead celebration. From here the typical 007 globe-trotting and vehicle-hopping ensue, but with little of the restraint or measured pacing that saw SKYFALL deftly move between its act two train toss and its eventual intense, claustrophobic (and only mildly HOME ALONE evoking) climax.

All of SPECTRE's action lands as large and loud as a subway car blown through a wall.

This isn't to say that the scenes aren't fun - an initial knock-down, drag-out in a gyring helicopter, and a mixed vehicle mountaintop chase are thrillingly choreographed and sweeping enough to match the over-the-top interplay between Bond and Spectre's droogs.

The problem becomes that all the big action, matched with Cristoph Waltz's slippery, mincing performance as the head of a vague super-secret crime clubhouse, never fully jibes with the haunted, emotionally weathered vibe that the Daniel Craig Bond films have coaxed out of the 007 franchise.

The result is a series of broadly suspenseful, action-packed or comedic (one particular bit ending in a rimshot-hungry airbag deployment treads closer to some of Roger Moore's antics than SPECTRE might want to admit) scenes that are wonderful, legitimate, classic James Bond, hung up in thready connective tissue that feels caught between the cocky, driven hero that CASINO ROYALE introduced and the broken, vengeful superhero that SKYFALL created.

While SPECTRE's action and villain successfully revel in classic Bond tropes, it's over-adherence to other aspects of the Bond formula only dull the film's effectiveness. The Bond Beds Three Broads convention, for example, leads to a brief and stilted sequence in Rome that fumbles the plot’s momentum while simultaneously squandering the talents of Monica Bellucci, who's given little more than a clunky cameo.

Meanwhile, the broader world-threatening, geo-political threat hangs on a dusty, predictable plotline revolving around digital surveillance and the tenuous relationship between personal privacy and national security. Okay - this does allow for some fun b-team capers involving M, Moneypenny and Q, ensuring that the characters and the wonderful actors portraying them never feel like mere window-dressing (*cough* monicabellucci). It also steals time from Bond's more personal story, which intends to tie the prior three films together into a neat package, but ultimately manages only to roughly cram them into a sack along with the more tantalizing re-heated leftovers of Sean Connery’s heyday.

If CASINO and QUANTUM were birthed into the world of Paul Greengrass’ latter BOURNE movies at the same time that Christopher Nolan’s DARK KNIGHT launched an inadvertent campaign for the douring of the American superhero, SKYFALL - and now SPECTRE - share a landscape with an ever more popular FAST AND FURIOUS franchise, and an increasingly diversifying Marvel Universe that over the past two summers has brought us some of its most gorgeously buoyant escapism in the form of GUARDIANS OF THE GALAXY and ANT-MAN.


That SPECTRE finds the Bond franchise evolving along these lines seems only right and natural for a series that has always, to more than one spectacular fault, aspired to keep its hero relevant. A learning curve is only to be expected – especially when relevance means teaching a tired new dog some wild old tricks.  (3 out of 4 Stars)
Posted by Matt Finley at 12:00 AM