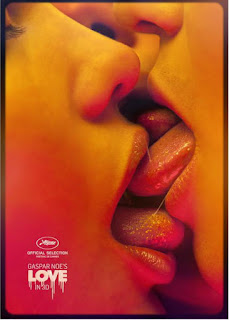 The plot unfolds from the perspective of Murphy (Karl Glusman), a young father and filmmaker who loves his son Gaspar, but is more than a little ambivalent towards the boy’s mother Omi (Klara Kristin). This is only exacerbated when Murphy checks his voicemail on New Year’s Day to find a message from the mother of an old flame, triggering a series of flashbacks in which we learn about Murphy’s often rocky but passionate relationship with Electra (Aomi Muyock).

There is an undeniable authenticity to the way Noe portrays the volatility of love, and the ways in which twists of fate can lead people down unexpected paths. It’s also a very personal film, with Murphy clearly a stand-in for Noe right down to sharing the same favorite film (2001: A SPACE ODYSSEY), and the director himself playing a role as an art gallery owner and former lover of Electra. Of course one viewer’s personal is another viewers self-absorbed and self-indulgent, and for this viewer at least the film teeters precariously on the edge of the latter.

But here’s the thing. Take the sex scenes out of LOVE, and the story is only marginally interesting. Take the story out, and the sex scenes come across as too distant to be truly erotic. The whole is greater than the sum of its parts, but not by nearly enough to achieve greatness, or even something edgy and original enough to demand a viewing regardless of the flaws. Say what you will about IRREVERSIBLE and ENTER THE VOID, Noe’s previous two films, but anyone who watches them won’t soon forget. LOVE may be an easier pill to swallow, but that doesn’t necessarily make it a better film. 2 ½ out of 4 stars.
Posted by Bob Ignizio at 12:00 AM