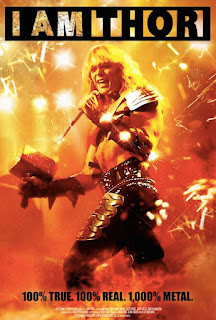 The stories of big rocks stars don’t interest me nearly as much as the eccentrics and cult acts who live on the fringe of the music business. Luckily for me, the last few years have brought a veritable treasure trove of documentaries on just such artists. We’ve had docs on Daniel Johnston, Roky Erickson, Pentagram’s Bobby Liebling, Canadian metal heads Anvil, and Detroit proto punks Death, to name just a few of the more prominent examples. And now comes Ryan Wise’s I AM THOR, a loving look at the muscular metal vocalist who has been plying his trade in one for or another since the mid seventies. And like fellow Canucks Anvil, although he’s had brushes with the mainstream, he never quite made it.

The film doesn’t spend much time on Thor’s (aka John Mikl Thor) early career as a bodybuilder, but he held both the Mr. Canada and Mr. USA titles at one time or another. But show business was his true calling, even if it meant appearing completely nude in revues like, “What Do You Say to a Naked Waiter?” He formed a band in the mid-seventies, and appeared solo on the Merv Griffin show (performing a cover of Sweet’s “Action” with Merv’s house band backing him up) in 1976 before releasing his debut album ‘Keep the Dogs Away’ on RCA records in 1978. Although hopes were high, and there was some buzz (particularly in England), stardom did not follow.

Undaunted, and now aided and abetted by his wife, Cheri magazine publisher and cover girl Rusty Hamilton, Thor soldiered on. He also branched out into acting, appearing in such B movies as ZOMBIE NIGHTMARE and ROCK AND ROLL NIGHTMARE (the former of which was featured on an episode of ‘Mystery Science Theater 3000’). Seemingly realizing that it just wasn’t going for him, Thor retired in 1987. A decade later he decided to give rock stardom another shot, a decision which probably led to his divorce from Hamilton, and he’s been carrying on ever since.

The thing about Thor is, he seems like a genuinely nice, down to earth guy. He puts his heart into putting on an entertaining show, and it’s clear he really loves what he’s doing. You can’t help but want him to succeed. But while his music is by no means terrible, it’s also just not the kind of thing that has even a remote chance of becoming huge.

Comparisons are made to KISS by some interview subjects in the film, some of who opine that Thor could have been just as big as they were with the right circumstances. Say what you will about KISS, but they understood how to write commercial pop songs to go along with their cartoonish image, and while I do enjoy some of Thor’s songs like “Sleeping Giants” and “Thunder in the Tundra”, no way were these songs ever going to be mainstream hits.

And there’s nothing wrong with that. Unless that’s what you were counting on like Thor evidently was

Now in his 60s, his once finely sculpted body considerably softer, and taking a regimen of pills to deal with various health problems, Thor keeps trying for that brass ring. And while he doesn’t quite get there, he does at least find some consolation playing a handful of festivals in Europe where metal fans are more receptive to his style of rock. Maybe it’s foolish for this guy to keep living his dream, but you also have to admire his determination. 3 out of 4 stars.
Posted by Bob Ignizio at 12:00 AM