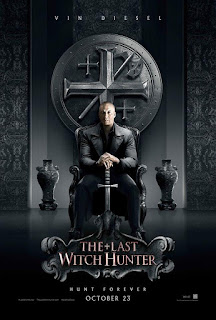 Forget your Matthew Hopkinses and your Joseph McCarthys - there's a new witch hunter on the block. His name is Kaulder (Vin Diesel), and he's a swaggering immortal sourpuss supposedly based on Diesel's own Dungeons & Dragons character. Directed by Breck Eisner (THE CRAZIES [2010]), THE LAST WITCH HUNTER is a generic urban fantasy aspiring to both MEN IN BLACK's snappily paced world building and HELLBOY's high concept confrontations between the ancient occult and the modern world.

Though it falls wildly short of both marks (while still cribbing liberally from each), it remains a more dynamic and vibrant entry to the agents-policing-a-secret-world-within-our-own subgenre than either R.I.P.D. or DYLAN DOG: DEAD OF NIGHT. In fact, despite numerous conceptual and practical shortcomings, I actually enjoyed this film.

Behind the mire of drab, slushy CG effects and apocalyptic portent, THE LAST WITCH HUNTER is your basic whodunit. When Kaulder's Priest Friday, the 36th Dolan (Michael Caine), a member of an ancient order sworn to assist and chronicle Kaulder's witch hunting antics, comes down with a bad case of the black magic cursies, Kaulder must locate the witchy perpetrator.

Let’s be clear: none of this should work. The mythology is a cumbersome, blustering mess where witches are actually another species who live among us, performing magic that’s sometimes based on the elements (elemental magic, Kaulder explains, isn’t inherently good or evil) but is sometimes based in the black arts… which is I guess non-elemental and inherently evil. So, maybe like licorice or something?

Meanwhile, Vin Diesel, who still sounds like his tongue needs bariatric surgery and looks like he’s prepping for a role in a shawarma commercial where he'll play a slowly rotating cylinder of lamb, should be just about the least compelling action-fantasy lead this side of other last fantasy thing guy, THE LAST AIRBENDER’s Noah Ringer.

And yet, again… I actually really enjoyed this film.

Sure, the magic is maybe all inciting incident spells and green screen concealment glamours, but the plot is fast and tight enough that either one scene ends before the magic becomes too haphazard, or another begins before the audience has a chance to notice, reflect or care.

Plus, as diegetic flashbacks go, having some magic available to actively zap a character back into their memory can be a lot more narratively propellant than some languorous dream sequence or hallucination. With much of the WITCH HUNTER's mystery hanging on a dormant memory trapped in Kaulder's head, this fudgeability of witch power proves a small mercy.

Yeah - Diesel doesn’t exactly disappear into the role…  but so what if he's basically cosplaying himself?  It’s clear from, like, the third scene that the dude is having a ball. These days, I'm always happy to see topically dark action performed without the seemingly contagious Christian Bale Glower ‘n’ Growl™. This extends to the entire cast, who bring believable energy to a crew of potentially monotone character facades.

Don’t get me wrong – there’s a lot of ham in this butcher shop window, especially from villainous bit players, like wily, besotted Ellic (Joseph Gilgun) and bearded brick witchhouse Belial (Ólafur Darri Ólafsson). But every manic smile and loopy rejoinder forces that much more humanity through the film’s many dull urban landscapes and pixel soup render effects.

I hate to keep harping on the way the movie looks because it’s really no worse than other modern horror action dreck like DRACULA REBORN or the UNDERWORLD series. Actually, from a set design standpoint, the film’s use of a plant motif, incorporating lush pillared, potted and tangled greenery for the largely amiable modern witch domains while the Queen Witch and her kith curl themselves in gnarled branches and dead vines is as effective as it is obvious (which is to say, quite).

Finally, for everyone out there wondering how much THE LAST WITCH HUNTER deals with classic witch hunting themes like the scapegoating and persecution of a minority group that the governing class perceives as an ideological threat, well… there's a tossed off reference to Salem, and we're meant to believe that Kaulder is deeply torn between his order’s kill-'em-all philosophy and witch society's laissez-faire approach to policing their powers (a plot point that leads to a bizarrely placed pro-death penalty argument), but with all the supernatural pomp and sword-swinging circumstance, the weightiest philosophical quandary the film manages to pose is something along the lines of, "can't we all just get along?"

But I actually truly really enjoyed this film.

I feel like a preponderance of my hand-wringing 2 1/2 star reviews are for movies that lose points for executing a fun or innovative premise poorly. In this case, kudos to THE LAST WITCH HUNTER for taking a terrible, unoriginal premise and making it moderately fun. (2 1/2 Stars)
Posted by Matt Finley at 12:00 AM