[THE KINDERGARTEN TEACHER opens in Akron on Friday October 2nd exclusively at The Nightlight Cinema.] 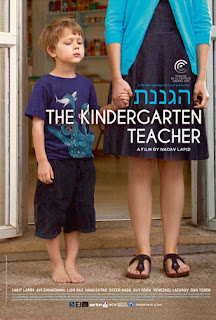 Israeli kindergarten teacher Nira (Sarit Larry) is an artistic soul married to a working class guy who has little interest in or understanding of her passions. Nor does she stand out much in her poetry club, her own writing talents being minimal. Things change when Nira discovers one of her students, Yoav (Avi Shnaidman), is a child prodigy of sorts who, when struck with sudden inspiration, goes into a trance like state and begins reciting poems for his nanny (Ester Rada) to write down. Nira “borrows” one of Yoav’s poems for her poetry group, gaining newfound respect from her the group leader, and a greater confidence in herself. But things soon escalate from mere plagiarism into something far more disturbing as Nira goes to increasing extremes to “protect” Yoav from a modern day Israel, and a modern world, she views as being hostile to poets.

On the one hand, THE KINDERGARTEN TEACHER is a creepily effective portrait of obsession in which a woman who seeks to escape the banality of her own existence by appropriating the genius of a child prodigy, and ultimately by appropriating the child himself. On the other hand, it’s meant to be an allegory for a world that has no use for poets and artists, the need to protect such individuals from being stifled, and the futility of doing so. Both aspects of the film are undermined by a subdued, realistic tone that clashes with the film’s growing implausibility, culminating in a final act that veers into “B” thriller territory, yet still tries to be taken seriously. It also doesn’t help that there’s an awful lot of padding in the film’s two hour running time. 2 ½ out of 4 stars.