[SLEEPING WITH OTHER PEOPLE opens in Cleveland on Friday October 2nd exclusively at the Cedar Lee Theatre.] 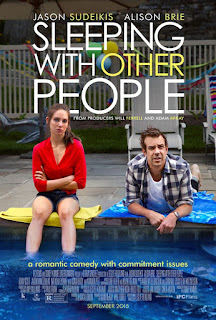 He’s an affable womanizer who intentionally sabotages all his relationships by cheating whenever things start to get too serious. She’s obsessed with a married gynecologist who can’t make up his mind if he even wants to keep the affair going. Years ago they lost their virginity to each other. Now they meet up again at a 12 step program for people with sex addictions and wind up becoming platonic best friends. But could the connection between these two go deeper than just friendship? This is a romantic comedy, what do you think?

SLEEPING WITH OTHER PEOPLE is yet another one of those movies in which two characters spend almost the whole movie dealing with one contrivance after another before inevitably realizing what the audience has known all along: they’re perfect for each other. It’s a formula, to be sure, but one that continues to work, especially when you have two leads as winning as Jason Sudekis and Allison Brie are here.

Where the movie runs into trouble is in creating the requisite complications for these characters. As Matthew, the manipulative ob/gyn Lainey is obsessed with, Adam Scott is the standard bad guy love interest we’d expect in a rom com. But Scott’s cold, awkward performance imbues the character with an aura of creepy weirdness that makes us question how either Lainey or his wife (or any human being for that matter) could possibly want to be around him for five minutes, let alone be in love with him.

Of course there has to be an obvious wrong choice female counterpart for Jake to chase after, and in this case it’s his boss, Paula (Amanda Peet). Paula seems nice and genuine, but her character isn’t fleshed out very much. She seems to exist only because it’s a requirement of the genre that Jake has to pursue a relationship that’s utterly wrong for him before he comes to his senses and commits to Lainey.

When Jake and Paula start dating in the film’s third act, it feels completely phony and forced. If their relationship had been left out of the film, it wouldn’t have changed the outcome much, if at all. It’s kind of refreshing that the “wrong girl” here isn’t the total bitch stereotype we usually get, but if the film absolutely must follow convention by having a romantic rival for Lainey, couldn’t she at least be written in an interesting way?

Writer/director Leslye Headland does much better when she sticks with her two main characters. Despite the fact that they’re living in a romantic comedy, both Jake (Sudekis) and Lainey (Brie) come across as real people who just happen to have some issues, not the idiots or certifiable lunatics who often populate such films. Watching as they try to stay friends despite the attraction between them works better here than in most rom coms because the characters are aware of it, talk about it, and have reasons for resisting it that at least make some kind of sense.

On top of that, SLEEPING WITH OTHER PEOPLE has some good jokes, and even offers a few insights into human nature along the way. It’s neither as banal as your average mainstream rom com, nor as affected and pretentious as a great many indie equivalents. Headland even throws in some nice visual touches, like updating the old split screen trick from Rock Hudson/Doris Day films with texting instead of phone conversations. And even when the film makes a misstep, the likability of Brie and Sudekis goes a long way towards smoothing things over. 3 out of 4 stars.
Posted by Bob Ignizio at 12:00 AM