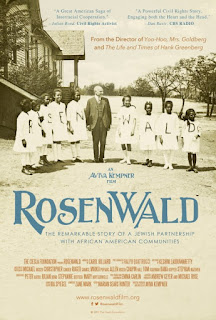 How many of you reading this ever wondered what the guy who ran Sears Roebuck was like, or what he did when he wasn’t running a department store? Probably not many. But as the documentary film ROSENWALD shows, his story is one well worth hearing. Julius Rosenwald, son of Jewish immigrants from Germany, was born in 1862 in Springfield, Illinois. He took up the family trade of selling clothing, and through a mix of fortune and business acumen found himself in a position to buy into the Sears-Roebuck company when Roebuck wanted out.

Under the direction of Richard Sears, a consummate salesman, and the more practical Rosenwald, Sears-Roebuck does extremely well. When Sears resigned his position in 1908 leaving Rosenwald in charge, the company soon became the largest retailer in the country. They sold just about anything an American of the time could want from chickens to houses.

The success of Sears made Rosenwald a very wealthy man, but by all accounts he stayed grounded and informal. He also held firm to his personal belief in philanthropy. One of the largest beneficiaries of Rosenwald’s generosity may be a bit surprising, though.

Seeing parallels between the way Jews were treated by European pogroms and how blacks were treated in America, Rosenwald donated a good deal of money and effort to helping African-Americans. Knowing how difficult it was under segregation for blacks to find lodgings, for example, Rosenwald would pledge to donate $25,000 towards a YMCA (at the time more a place for cheap lodging than the health clubs they are now) and then challenge the community to come up with the rest of the money. Eventually he helped build 27 YM and YWCA’s. At the urging of Booker T. Washington, Rosenwald also contributed heavily to schools for black students.

We learn all this and more in Aviva Kempner’s film, which largely follows the Ken Burns formula. It’s not especially cinematic, but the story is more than interesting enough to hold the viewer’s attention. 3 out of 4 stars.
Posted by Bob Ignizio at 12:00 AM