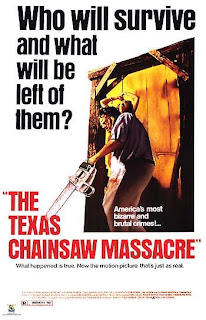 I don't particularly want to review THE TEXAS CHAIN SAW MASSACRE (and yes, when we're talking about the original 1974 version, “Chain Saw” is two words - that's the way it's spelled in the opening credits). Don't get me wrong; I love the film. In fact I think it's probably the most important, most intense, and most entertaining horror film of the modern era. But what am I going to say that hasn't already been said? That it's actually not very gory (seriously, it isn't)? That the set design by Robert Burns is brilliant and plays a crucial role in the film? That star Marilyn Burns gives perhaps the most convincing portrayal of onscreen terror ever seen, and that Jim Siedow, Gunnar Hansen, and Ed Neal are so effective at playing homicidal maniacs that you wonder if they might not actually be that way in real life? That the film also has a wicked streak of black humor and social satire? All that is true, and it's all repeated ad nauseum by other writers, so why rehash it here?


What I'm going to do instead is talk about one aspect of THE TEXAS CHAIN SAW massacre that I have a particular fondness for: the brilliance of the film's marketing. Yeah, yeah, yeah, that's probably been analyzed countless times as well, but I've gotta' write about something. Besides, talking about how the film was promoted gives me a chance to bring up its Cleveland connection.

First of all, the importance of the film's title cannot be underestimated. As far as exploitation movie titles go, it doesn't get any better than THE TEXAS CHAIN SAW MASSACRE. It's both a promise and a threat, depending on your point of view. For those seeking lurid thrills at the drive-in or grindhouse, it was like a siren's call. For the guardians of public decency, it all but guaranteed a public outcry, which in turn all but guaranteed that more people would go see the film.

Just as important as a great title for an exploitation movie is a great poster, and CHAIN SAW had the good fortune to be made in the decade when the movie poster art-form was at its peak. I don't even have to mention such high points as the STAR WARS or JAWS posters; can you name one poster in the last three decades that's even half as cool as your average seventies movie poster? Didn't think so. Anyway, the poster for THE TEXAS CHAIN SAW MASSACRE is right up there with the best in promotional artwork the seventies had to offer. First of all, the artwork is just plain gorgeous in its hideousness. And like the movie itself, it seems to show much more than it really does. Suggestion is everything here, and one can imagine all kinds of horrors stemming from this one moment frozen in time.

And let's not underestimate the power of the ad copy, either. “Who will survive, and what will be left of them?” - now that's a tagline, people. That in and of itself would be more than enough to seal the deal, but the poster goes on, in true P.T. Barnum ballyhoo fashion, to make the claim that, “What happened was true. Now the motion picture that's just as real.” Yeah, not quite. Like Alfred Hitchcock's PSYCHO, CHAIN SAW was loosely inspired by the Wisconsin murderer Ed Gein. Very loosely. Let's say 5% inspiration, 95% bullshit.

Now in the golden age of exploitation movies, having a great title and poster was about all you really needed. But CHAIN SAW director Tobe Hooper went the extra mile and actually made a good movie. Since I'm not actually reviewing the movie, I only mention this because having a good movie helps a lot when it comes time to make the trailer. It's not necessary, but it does help.

Anyway, the trailer for THE TEXAS CHAIN SAW MASSACRE is a real doozy, and this is where the Cleveland connection comes in. Aside from presenting an almost perfectly edited selection of highlights from the film, the trailer features a voice-over performance by Ernie Anderson. For those who don't know, Anderson was Cleveland's original horror host under the name Ghoulardi. Later he moved to Hollywood and became one of the biggest announcers in the business. His son is Paul Thomas Anderson, director of THE MASTER, THERE WILL BE BLOOD, and BOOGIE NIGHTS, among others. Ernie was probably best known for saying, “tonight on the Looooove Boat” and handling announcing duties on “America's Funniest Home Videos”, but he also did voice work for movie trailers, and he's certainly in fine form here. Like I said, this isn't a review of the movie. I'm not going to try to convince you to see THE TEXAS CHAIN SAW MASSACRE or not. Instead, I'll leave it to the power of Ernie to persuade you.