Repost: Night of the Living Dead (October 17th at the Capitol Theatre, part of 12 Hours of Terror 2015)

[NIGHT OF THE LIVING DEAD screens Saturday October 17th as part of 12 Hours of Terror 2015 starting at 8pm and running until 8am the following morning.] 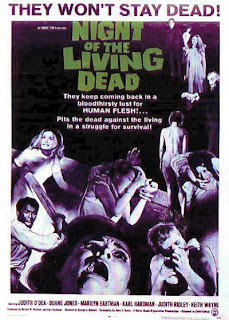 "They're coming to get you, Barbara!" NIGHT OF THE LIVING DEAD was a landmark in many ways. As a homegrown effort, shot on B&W 16mm on weekends for $150,000 by a then-unknown Pittsburgh-area industrial filmmaker George Romero and his friends (with a local TV horror host making a cameo), it proved you don't have to be in Hollywood to do a classic. As horror, it brought a virtually unprecedented level of realistic gore and disturbing grotesquerie to creature-feature fans (many of them children) who just a few years previously were expected to be scared by old reruns from the 1930s. And it created the enduring, creepy modern movie "zombie" - not the enchanted sleepwalkers of black-magic voodoo myth, but a mindless, flesh-eating revenant corpse, able to infect other people, creating ever more cannibal zombies out of its own victims, the hungry, moaning multitudes eventually overwhelming normal people like a plague.


When this premiered in theaters in the 1960s, critics and commentators were outraged, especially that kids in the audiences had been exposed to such a nightmare. Though it's unrated by the MPAA, some posters and ads for NIGHT OF THE LIVING DEAD carried an "X" rating (for gruesome violence, not sex), and that should tell you something. For a generation of university-bound teenagers, watching it at the college film-society was a lot like a hazing - proof that you'd attained adulthood. It's still intense.

Amazing film fun fact: the word "zombie" is never uttered. Instead they're called "ghouls", the recently (i.e. more or less intact) dead, who suddenly stagger to their feet and try to eat the living. Starting with a young woman and her brother attacked in a cemetery by one of the creatures, the plot finds a group of strangers seeking shelter from the ghouls in a remote house. Barricaded inside, they see TV bulletins linking the zombie plague to "radiation" from a Venus space probe contaminating the environment, and they hear the only way to stop a ghoul is to destroy the brain with a well-aimed bullet or cranial blows.

The panicked survivors split into two factions, a family called the Coopers, who want to stay barricaded indoors and wait for help, and a more pro-active bunch, led by Ben (Duane Jones), an assertive black man (that no big deal is made of his ethnicity and he's on equal footing with the whites made this film light years ahead of its time), who plan a dash to safety, despite the ghouls massing relentlessly in the dark outside. A famously shocking finale indicates that neither of their plans works out.

As appreciation of NOTLD (even the acronym became famous) gradually grew, scholars began reading a lot of messages into the material, about the dehumanizing violence of the 1960s (especially the Vietnam War, brought into America's living rooms by the nightly news), about racism, about consumerism and conformity. Even actors like Duane Jones denied there was a political agenda involved in making what they all figured would be a very scary movie. But consciously or not, this pushes a lot of buttons with its well-rendered camera angles, effective jolts, claustrophobia and the fate-worse-than-death zombie vibe.

Because the amateur filmmakers never got proper copyright, the original NOTLD wound up in the public domain, and can be distributed - even re-edited - by anyone. This has led to lots of fuzzy-looking, technically inferior copies on the market, computer-"colorized" versions, and one spoof edition with completely dubbed-in gag dialogue (the title is some kind of juvenile goof like "Night of the Dawn of the Day of the Rotting Subhumanoid, Gut-Crunching etc. ...Dead." Google it if you must). You know something? Even with a bad-joke soundtrack, the imagery in that is still disturbing.

Since Romero and his investors got little or nothing out of their cult-film bonanza, curious offshoots and variations have been made, by them and others, such as the RETURN OF THE LIVING DEAD series (which, though grimly humorous, is far heavier into sex, nudity and gore), a color 1990 NIGHT OF THE LIVING DEAD remake, blood-soaked Italian imitators, and a "30th Anniversary Edition" on the Anchor Bay label that restores the 1968 original's excellent pictorial quality but contains different music and extra gore scenes and superfluous characters, filmed much later. George Romero made his own set of sequels, and horror fans think his 1978 DAWN OF THE DEAD is even better and more thematically richer (it's certainly grislier). (3 1/2 out of 4 stars)