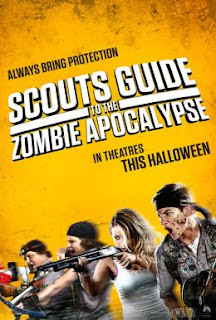 The event will take place in select AMC Theatres locations across the U.S. (including Cleveland's AMC Ridge Park Square) on Wednesday, October 28th at 7:00 p.m. Ticket holders will also receive a commemorative t-shirt.

Tickets are available for purchase now at participating theater box offices and online at
www.ScoutsAndZombiesMovie.com/ultimatefanexperience

DJ/Producer/Artist Dillon Francis, who makes a cameo in the film, released his debut album "Money Sucks, Friends Rule" last year. Featuring standout track "Get Low," the album was named one of Rolling Stone’s Top Electronic Albums of 2014. His latest release “This Mixtape is Fire,” which sees Dillon Francis return to his Moombahton roots, debuted at #1 on Billboard’s Dance/Electronic chart, fueled by collaborations with Calvin Harris, Skrillex, Chromeo and more. Having played shows and festivals in the UK, Brazil, Argentina, Chile, France, Australia and more, Dillon Francis is continuing to make a name for himself as one of the most influential players in electronic music.

"SCOUTS GUIDE TO THE ZOMBIE APOCALYPSE" follows three scouts and lifelong friends who join forces with one badass cocktail waitress to become the world’s most unlikely team of heroes. When their peaceful town is ravaged by a zombie invasion, they’ll fight for the badge of a lifetime and put their scouting skills to the test to save mankind from the undead. Starring Tye Sheridan, David Koechner, Cloris Leachman¸ Halston Sage, Logan Miller, Joey Morgan, Sarah Dumont and Patrick Schwarzenegger.

"SCOUTS GUIDE TO THE ZOMBIE APOCALYPSE" opens in theaters on October 30th, 2015.