Lips of Blood (October 30th at the Cleveland Cinematheque)


[LIPS OF BLOOD screens Friday October 30th at 10:10 pm at the Cleveland Cinematheque.] 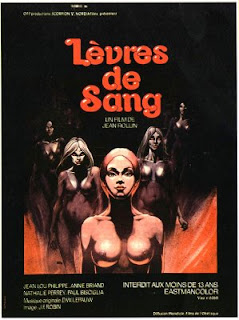 French director Jean Rollin is best known for making plotless erotic vampire movies that offer up great visual moments and plenty of atmosphere, but not much in the way of story.  LIPS OF BLOOD is a rare exception in that there is a coherent plot in here somewhere.  Frederic (Jean-Loup Philippe) has little memory of his childhood.  All he can recall is something about staying the night at a castle with a pretty red haired girl (Annie Briand), a memory Frederic’s mother (Nathalie Perrey) has convinced him is only a dream.  But when Frederic sees an advertisement that uses the castle as its backdrop, he embarks on a dangerous quest to learn the truth about his past.

This being a Jean Rollin film, it should come as no surprise that Frederic’s quest involves sexy female vampires in various states of undress, striking imagery like a coffin used as a boat, and an underlying theme of the youth/counter culture (represented by the vampires) being persecuted by the ignorant forces of authority.  The thematic and visual elements still rule the day, but with a more traditional narrative structure than most of Rollin’s films this is a more accessible movie than works like THE NUDE VAMPIRE or REQUIEM FOR A VAMPIRE.  As such, it makes a good entry point for those unfamiliar with Rollin’s work, as well as being a high point in the director’s career.  3 out of 4 stars.