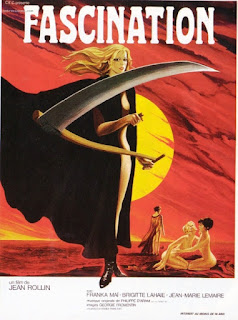 Like LIPS OF BLOOD and LIVING DEAD GIRL, this is one of the more coherent films from French director Jean Rollin.  Mark (Jean-Marie Lemaire), a thief, takes refuge from his former partners in a mansion.  The building is inhabited by two women who claim to be the servants.  In reality they are part of a cult of blood drinkers.  One of the women, Eva (Brigitte Lahaie), plans to turn Mark into the main course for her and her friends.  However Elisabeth (Franca Mai) takes a liking to Mark and wants to save him.

Plot isn’t usually Rollin’s main focus, but the story in FASCINATION is actually pretty interesting and boasts a nice twist at the end.  Rollin’s trademark visual style is still apparent, but it’s somewhat toned down compared to his earlier works.  There’s also a little more sexual content, a necessary concession to the trends of the time, though not the full-on hardcore material that some of Rollin’s later films would include. It’s not exactly horror, and not exactly erotica, and not exactly an art film, but a little bit of all of the above. 3 out of 4 stars.
Posted by Bob Ignizio at 12:00 AM