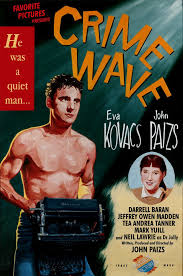 The Top! Few guys make it: John Paizs did. The Winnipeg filmmaker was what Jerry Lewis would describe as a “total filmmaker.” After writing, directing, editing, and starring in a handful of delightful short films (which would be collected into The Three Worlds of Nick), Paizs crafted CRIME WAVE. The film tells the tale of filmmaker Steven Penny (Paizs). He can write the beginnings and endings to stories but never those elusive middles. Through the vignettes of rejected films, Paizs introduces the audience to a handful of characters who populate his active fantasy life.
The film could easily fall into a trite “four characters in search of a director” trap save for the story of Penny’s relationship with Kim (Eva Kovaks), the pre-teen daughter of his new landlords. A quiet man, we never hear Steven say a word so Kim speaks for him; narrating his story for the audience. Paizs is not afraid to play Penny as an oddball. With unlimited insights on his writing and fantasy life, we’re never quite sure if Penny’s obsession for making the best colour crime movie is a healthy one.

The film premiered at Toronto’s Festival of Festivals in 1985 where it met the first of many challenges. The screening was marred by technical problems. Despite some rave reviews, Piazs wasn’t satisfied with the end of the film and went back to the drawing board to craft an entirely new third act.

When the film made its VHS debut the distributor balked about CRIME WAVE’s title being too similar to the 1985 Sam Raimi film CRIMEWAVE. This led to the bizarre addition to Paizs’s gorgeous title screen with “The Big” being clumsily superimposed over the top of the screen. Even today, when people discuss the film “CRIME WAVE” from the mid-’80s, confusion reigns.
Through a series of acquisitions, mergers, and sales, the rights to a DVD or Blu-Ray release of CRIME WAVE has yet to happen. Yet, the best way to see the enormity of what Paizs managed to create on a small budget with limitless imagination is on the big screen with an audience experiencing the joy of the film for the first time.
Posted by Bob Ignizio at 12:00 AM