Cleveland Cinemas Serves Up a Ghoulish Slate of Films in October 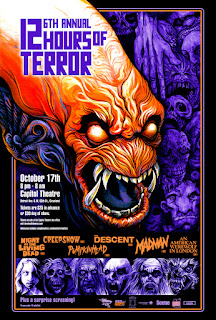 October promises to be a terrifying month for movie-goers in Cleveland thanks to the scary line-up of creepy and occasionally kooky films presented at various Cleveland Cinemas locations.

THE ROCKY HORROR PICTURE SHOW* – The ultimate cult classic about a transvestite mad scientist and the creature he creates.
Apollo Theatre (19 E. College St., Oberlin): October 9th at midnight
Tickets are $6 for the Apollo Theatre screening

CREATURE FROM THE BLACK LAGOON (in 3D) – One of the greatest movie monsters of all time splashes right off the screen in this newly restored digital 3D print from Universal Pictures. An amphibious human like creature takes a shine to the beautiful girlfriend of a scientist studying the Amazon River in this classic horror film from 1954.
October 25th 10:00 AM
Capitol Theatre (1390 W. 65th St, Cleveland)
Tickets $6
Part of the Sunday Classics Brunch and Movie Series. Visit one of our partnering restaurants following the films at the Capitol Theatre and receive a discount when you present your Classics ticket stub. Capitol Theatre partner restaurants: LUXE offers 2 for 1 Bloodies, Bellini's or Beers, Latitude 41n offers 20% off brunch menu entrees. Enjoy a film-inspired offering from Spice Kitchen + Bar.

Tickets are available at the theatre box office and www.clevelandcinemas.com.
Posted by Bob Ignizio at 12:00 AM