A Nightmare on Elm Street (October 9th and 10th at the Aut-O-Rama Drive-In, part of Retro Halloween Weekend) 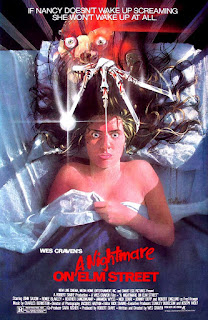 Once the name `Elm Street' was almost a cliche for a typical suburban address in any Thornton Wilder all-American town. Now it carries the same spooky baggage as `Sleepy Hollow' or `Transylvania.' A given real-life Elm Street (such as Oberlin’s) is often reputed to have a haunted house on it. That's all thanks to this hit horror movie that kicked off a popular series and invented a new horror character and mythology.

Part of the success of A NIGHTMARE ON ELM STREET was that the late Cleveland native and film horrormeister Wes Craven unleashed it in 1984, at a time when banal, bloody copies of FRIDAY THE 13TH commonly filled theaters, vile slasher stuff peddled to kids like stale Halloween candy in late November. Any teen-themed horror film that was even halfway original and imaginative would have stood out refreshingly, and this one did.

Craven scripted the cast of teenage characters a shade more sympathetic and well-drawn than Jason's victims, and one is played by none other than Johnny Depp, in his movie debut, cast untypically as a not-so-dumb (but not especially smart) football jock.

His girlfriend Nancy (Heather Langenkamp) and two schoolmates have been having disturbing dreams about a badly scarred man in a hat and garish striped sweater, stalking, taunting and trying to kill them with a custom-made glove that has knives in the fingers.

After a ghastly murder (during unauthorized sleepover/sex party with another teen couple, in which the other boyfriend is falsely blamed), Nancy manages to pry the truth from her alcoholic, divorced mother (Ronee Blakely). Years ago a child-killer named Freddy Krueger prowled their neighborhood and was released from jail on a legal technicality. The grownups set his dwelling on fire, burning Krueger alive, and concealed their act of vigilantism. Of course, those same grownups now have no clue that the renewed `nightmare’ on Elm Street is the vengeful ghost of Freddy hunting and tormenting their sleeping offspring.

While the dream-attack gimmick (which is never really explained as clearly as you’d wish it were) makes for lots of shock scenes and visual surprises, teasing the viewer about what is or isn’t `real,’ underneath that filmmaker Craven plants more sophisticated seeds of unease. Parenting and family life – a source of reassurance and protection in horror movies like POLTERGEIST, are not comforting here. Mothers and fathers killed Krueger, covered it up, and now the villain is punishing their children for it rather than them. This is actually the old sins-of-the-fathers Biblical warning dressed up in slasher clothing, though little of it carried over into the plethora of sequels, done mostly under other directors.

Once again going against most horror-movie trends, the followups to NIGHTMARE showed larger-than-usual ambition (at least by the dismal standards of 1980s movie sequels) in exploring the Freddy mythos, and can stand well on their own, for those into this sort of thing. Longtime character actor Robert Englund became a genre superstar with his progressively ghoulish and witty portrayal of the shape-shifting fiend, and briefly did a TV horror anthology series in character as Krueger. I cannot speak to the quality of a recent, bigger budget NIGHTMARE ON ELM STREET remake/reboot handing the role to Jackie Earl Haley; I don’t want to sully whatever respect I may retain for the original.

But its studio, New Line Cinema, prospered in large part due to the franchise earnings and metamorphosed from a low-budget operation to a successful A-list production company. So even if you’re put off by horror but were awed by Peter Jackson’s Tolkein epics, remember that it came from a studio whose nickname is “the house that Freddy built.” (3 out of 4 stars)