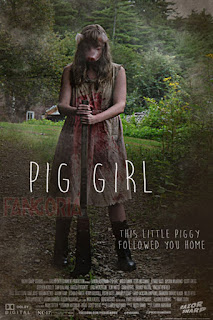 When it comes to micro budget horror films, there are a handful of good ones, a whole ton of unwatchable shit fests, and not much in the middle. PIG GIRL is all of the above. I say this because it’s essentially three movies in one.

Movie #1 gets down to business quickly. There’s a brief recap of the PORKCHOP trilogy of low budget slasher films that precede PIG GIRL –  a guy in a pig mask killed a bunch of people in the woods before being killed himself, and it’s rumored he had a daughter who might be carrying on his deadly ways. Of course it’s no rumor, and of course yet another group of idiots head off into the woods to learn that truth the hard way.

Plotwise this is standard issue woodland slasher stuff. Oddly, there isn’t much in the way of suspense or intensity to the stalk and kill scenes, and the film tends to cut away from the deaths quickly – if you’re looking for your low budget gore fix, it’s not here. As if to make up for the lack of graphic violence, PIG GIRL amps up the nudity and sex. On a technical level, the film is shot and edited in a competent, if bland, manner. The acting isn’t bad for something on this budgetary level, and might have come across better if the dialogue were better. This is the “somewhere in the middle” movie.

Then comes movie #2, which plays out during the closing credits. It’s really just a short in which Pig Girl (producer Missy Dawn, who also plays one of the campers in the first part of the movie) stalks and kills a family in their home. And this is where we see the potential this movie had. All that intensity that was missing from the earlier kill scenes is here, along with much better editing and some genuine style. And yeah, the gore is here, too. It’s kind of fake looking, but it’s done using old school practical effects, and for guys like me who grew up watching cheeseball horror movies in the eighties, it hits the spot.

Combined, these first two sections add up to a watchable low budget shocker that delivers the exploitation movie goods the audience for this kind of thing is looking for. Unfortunately it also adds up to just barely an hour, not enough to qualify as feature length. And so we get movie #3, the unwatchable shit fest. It’s about 15 minutes worth of tacked on silliness in which a TV reporter interviews the friends and family of the people killed by Pig Girl. It’s supposed to be funny, but mostly just feels like the padding it is. Such is the way of things in the twilight world of micro budget filmmaking, where even good filmmakers often have to settle for less than what they’re capable of because the money runs out.

The advice for the average film viewer, the sort who thinks the modestly budgeted but still slick horror fare that pops up on Netflix streaming looks cheap, is to skip PIG GIRL completely. This kind of threadbare filmmaking isn’t for most. Those hardcore horror junkies used to these kind of things, however, should find enough to like here to make PIG GIRL worth a watch. Just maybe turn it off after the end credits scene. 2 out of 4 stars.
Posted by Bob Ignizio at 12:00 AM