31 Days of Halloween: The Inhabitants (now available on VOD)


[31 Days of Halloween 2015: THE INHABITANTS is now available to rent or buy through most VOD outlets.] 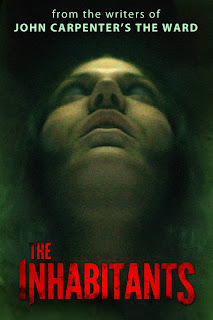 A young couple (Elise Couture as Jessica and Michael Reed as Dan) buys an old New England bed and breakfast only to discover it has a (surprise, surprise!) dark history of witchcraft and murder in THE INHABITANTS. Not exactly earning high marks in the originality category, are we?

Still, the film has some aspects that kept me invested up to its equally unoriginal climax. For starters, it has the look and feel of one of those regionally made films that was good enough to get national distribution of some kind back in the seventies/early eighties, like LET’S SCARE JESSICA TO DEATH or DON’T LOOK IN THE BASEMENT. It’s a little rough around the edges, but there’s a sincerity to it, a roughhewn authenticity, that you just don’t find in mainstream Hollywood fare. There’s also an attempt to imbue the film with a feminist subtext to give it some depth, but it never quite pays off.

Among the film’s more obvious influences are its witch mythology reminiscent of THE BLAIR WITCH PROJECT, and the surveillance camera footage capturing the spirits on film in green tinted night vision right out of PARANORMAL ACTIVITY. At least it’s not done in the increasingly tiresome found footage style, and there’s an actual plot that tries to build suspense and create atmosphere rather than just relying on the faux reality of it all to make things seem scary. There's also a rapey locals subplot that reminds one of STRAW DOGS or LAST HOUSE ON THE LEFT, and of course the use of the supernatural as a metaphor for the unaddressed emotional and psychological issues of the protagonists has been used in countless films.

All this familiarity drags eventually drags the film down. We’ve seen all these ideas done better in other films. Not only that, but all the various pieces are put together in such a clunky fashion that it never really flows. The Rasmussen’s do a good job behind the camera, and Couture and Reed are fine actors, but the rote parade of horror tropes makes it hard to fully invest in what’s happening. 2 out of 4 stars.
Posted by Bob Ignizio at 12:00 AM