[31 Days of Halloween 2015: TALES OF HALLOWEEN opens in Cleveland on Friday October 23rd exclusively at the Cedar Lee Theatre.] 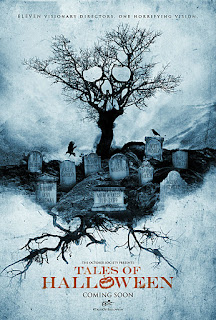 In recent years, the horror anthology has experienced a bit of a revival. First there was GRINDHOUSE, a double feature from Quentin Tarrantino and Robert Rodriguez that also included fake trailers from a selection of filmmakers. Michael Dougherty’s TRICK R TREAT was ready for release the same year, but wound up sitting on a shelf until 2009.  When it was finally released on home video in 2009, it become a cult classic and seasonal favorite for horror fans. The more comedically inclined CHILLERAMA followed in 2011 boasting a quartet of directors including Adams Rifkin and Green. Then in 2012 there was V/H/S and THE ABCs OF DEATH, both of which featured multiple directors and shorter segments (especially in the case of ABCs), and both of which did well enough to spawn sequels.

Now along comes TALES OF HALLOWEEN which combines the seasonal theme and interconnected world of TRICK R TREAT with the shorter segments and multiple director approach of V/H/S and ABCs. The results are, as is often the case with anthology films, decidedly mixed.

Adrienne Barbeau provides the wraparound narration as a small town radio disc jockey (not unlike the one she played in John Carpenter’s THE FOG), introducing each of the short stories. The basic template is set right off the bat in Dave Parker’s “Sweet Tooth”. The titular character is a legendary revenant who kills any little kids who don’t leave a piece of their Halloween candy for him. In order to get the candy he has coming to him, Sweet Tooth will cut the offending kid open and suck the goodies right out of their intestines. Seems like kind of a harsh punishment for such a small infraction, but that’s how these things work in stories like this.

The rest of the segments are mostly on a par with the first. It’s basically EC comics stuff with the gore amped up and story, characterization, and cleverness reduced to the absolute minimum. It’s all quick setup and then cut to the punchline. For those with short attention spans who just want to get to the bloody money shots, it’s probably perfect. For this reviewer, not so much.

That said, a few segments managed to provide some entertainment value for this jaded horror fan. “Friday the 31st” (directed by BIG ASS SPIDER!’’s Mike Mendez) has a Jason-like slasher meet his match when a tiny alien shows up looking to trick or treat.  And Ryan Schifrin (son of composer Lalo) turns in a fun twist on an O’Henry classic with “The Ransom of Rusty Rex”. Neil Marshall (DOG SOLDIERS, THE DESCENT) closes things out with an odd but reasonably engaging story of a killer pumpkin in “Bad Seed”. None of them hold a jack-o-lantern’s candle to any of the segments in TRICK R TREAT, but they do entertain.

Production values are high throughout, and both the directors (which also includes Darren Lynn Boussman (the SAW series), Lucky McKee (MAY)) and actors (Barry Bostwick, Lin Shaye, Lisa Marie, Barbara Crampton, John Landis, Caroline Williams, Stuart Gordon, and many more) are genre favorites. I’m sure plenty of other horror fans will appreciate touches like that, and the tales themselves, just fine. And like I said, a few of the segments did work for me. Overall, though, I just wasn’t feeling it. 2 ½ out of 4 stars.
Posted by Bob Ignizio at 12:00 AM