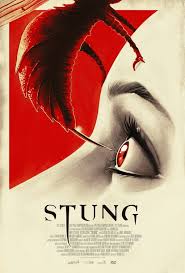 A party for a bunch of rich folks isn’t much fun when giant mutant wasps start attacking the guests in STUNG. Rising to the occasion to do battle with the deadly insects is Sydney (Clifton Collins Jr.), a stoned caterer’s assistant who has a crush on his boss, Julia (Jessica Cook). Can Sydney save Julia and the other survivors (including special guest star Lance Henriksen as a hardened military man), or will they all wind up on the wrong end of a stinge? More importantly, will anyone watching this movie care? The answer for this reviewer, at least, was a resounding, “no”.

STUNG clearly wants to be a cult horror-comedy classic in the vein of EVIL DEAD 2 right down to its stupid schlub of a would-be hero. But whether it’s the way Sydney is written or the way Collins plays him, he doesn’t even come close to having that inexplicable charm and likeability that Campbell manages to imbue Ash with. Nor is there anything here that even approaches the inventiveness or sheer insanity of what EVIL DEAD series Sam Raimi and his collaborators came up with. This is strictly straight to video fodder for bored teenage horror fans on a Friday night, and barely passable as that. 2 out of 4 stars.
Posted by Bob Ignizio at 12:00 AM