[31 Days of Halloween 2015: THE NIGHTMARE is now available on DVD, Blu Ray, On Demand, and Netflix Instant.] 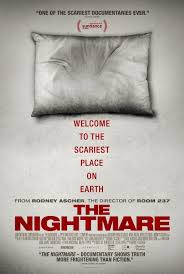 Sleep paralysis is, as one interview subject in Rodney Ascher’s documentary THE NIGHTMARE puts it, “a thing”. More specifically, the term describes an experience some people have when falling asleep or waking up in which they are semi-conscious but unable to move. Often the state is accompanied by feelings or even actual visions of strange beings observing the sleeper. That’s why sleep paralysis is often cited by skeptics as a likely explanation for people who believe they have been abducted by aliens and other alleged paranormal phenomena. That certainly sounds plausible, but what’s the explanation for sleep paralysis, then? Sadly, THE NIGHTMARE doesn’t seem all that interested in finding it.

Instead, we are treated to the first person accounts of several people who have experienced sleep paralysis, and horror movie style recreations of their stories. One interview subject opines that science hasn’t done a very good job of explaining the phenomena, and Ascher basically leaves it at that without following up with any sort of actual researchalk. He seems far more interested in presenting the idea as a kind of spook show rather than understanding it.

In Ascher’s previous documentary ROOM 237, it made sense to allow the various competing interpretations of Stanley Kubrick’s film of THE SHINING to compete on equal terms, as film analysis is a subjective thing. Sleep paralysis, however, falls within the realm of reality, however strange it may be, and as such it seems that a scientist or two ought to have been brought in to give talk about what science really says about the phenomena, rather than simply dismiss the more mundane explanations because they aren’t fun, or they’re hard to understand, or whatever reason Ascher had for doing so. Listening to the various victims of sleep paralysis recount their stories is not wholly without interest, but without delving deeper the film winds up coming off as rather shallow and hokey. 2 ½ out of 4 stars.
Posted by Bob Ignizio at 12:00 AM