[31 Days of Halloween 2015: MOTIVATIONAL GROWTH is now available on DVD, Blu Ray, and On Demand.] 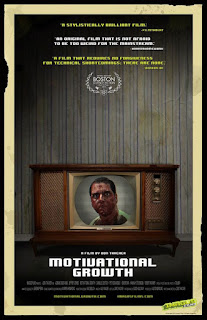 “His name was Kent. He was my television set. He died somewhere around week 67. Odd, I always thought I’d be the first to go.” So says Ian (Adrian DiGiovanni) when we first meet him sitting in the squalor of his apartment in writer/director/editor Don Thacker’s MOTIVATIONAL GROWTH. Distraught over the loss of what was essentially his only friend, Ian tries to kill himself by mixing chemicals in his bathroom, but fails. It seems he’s doomed to continue his miserable existence, but then he discovers a sentient pile of mold has taken up residence on the side of his sink, and The Mold (the voice of Jeffrey Combs) apparently wants to see Ian reach his full potential. Getting there may just involve a few murders, though. Not to mention suckling black liquid from The Mold’s fungusy teat.

This was listed under the horror section of my VOD provider, and while MOTIVATIONAL GROWTH certainly has horrific elements, I’m not sure I’d quite call it a horror film. I’m not sure what I’d call it, really, other than my kind of twisted cult flick. The direction feels assured, and while the acting is a bit affected, the style fits the material. And though he’s only present through his voice, Combs turns in a performance every bit as memorable as his Herbert West in RE-ANIMATOR. Give some of that credit to special effects supervisor Steve Tolin and his crew, who bring The Mold to life using old school techniques that make for a much more memorable character than CGI would have.

As weird as MOTIVATIONAL GROWTH gets,  I never felt as if the film was being weird for its own sake, but rather that Thacker had a definite vision he wanted to get across, and for the most part he does just that. No doubt many viewers will find it too out there for their tastes, but those to whom The Mold speaks will love it. 3 out of 4 stars.
Posted by Bob Ignizio at 1:00 AM