31 Days of Halloween 2015: Extraordinary Tales (now in limited theatrical release and on demand)


[31 Days of Halloween 2015: EXTRAORDINARY TALES is in limited theatrical release and available On Demand.] 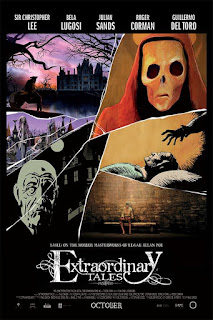 The stories of Edgar Allan Poe have long been a source of inspiration for filmmakers, going all the way back to the silent era and continuing on to the present with this animated anthology. EXTRAORDINARY TALES presents some of Poe’s best known and frequently adapted tales in a variety of styles, and narrated by such horror luminaries as Christopher Lee, Bela Lugosi (via an old recording, obviously), Julian Sands, and Guillermo del Toro. There’s also a framing sequence in which Death (Cornelia Funke) tries to convince Poe (Stephen Hughes), in the form of a Raven, to accept her embrace.

Of the segements, my favorites are probably “The Tell-Tale Heart”, a purely black and white (not even shades of grey) telling of the story that looks a bit like Frank Miller’s ‘Sin City’ artwork, and “The Case of M. Valdemar”, which has the appearance of an old comic book. One word of caution: don’t go mistaking this for kid’s stuff just because it’s animated. While most of the segments would warrant only a PG rating, “Masque of the Red Death” features depictions of nudity and sex that most parents won’t want their kids watching.

While the artwork and animation are undeniably striking, it is ultimately the power of the classic tales themselves which makes this a film worth watching. And while the voices of the narrators certainly add to one’s enjoyment, “The Masque of the Red Death” proves effective told in purely visual form save for one line of dialogue by Roger Corman, the director responsible for several stellar Poe adaptations in the sixties. Of course those classic Corman films almost all starred the late Vincent Price, and while there is no posthumous use of his voice as there is of Lugosi’s, the actor was almost certainly the model for the doctor in “Valdemar”.

It’s unlikely that modern audiences will be frightened by anything contained herein, but Poe’s themes of life, death, and the spaces in between still resonate as much now as they ever have. That said, EXTRAORDINARY TALES doesn’t quite come up to the bar set by previous Poe anthologies like TALES OF TERROR or SPIRITS OF THE DEAD. Nonetheless, its artistry and passion make it worth a watch. 2 ½ out of 4 stars.
Posted by Bob Ignizio at 12:00 AM