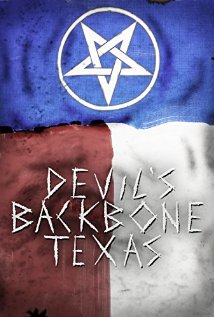 Burt Wall, a horror writer living alone on a secluded ranch, may have supernatural inspiration for his stories, or he may just be a gigantic bullshit artist. After his death, his family investigates his homestead hoping to find out just which one it was. The new found footage film DEVIL’S BACKBONE, TEXAS being in the horror genre, you just know they’re going to regret their curiosity. It's just an awful long (and awfully dull) journey getting to that regret.

Following the THE BLAIR WITCH PROJECT playbook to a “T”, DEVIL’S BACKBONE, TEXAS starts out with more polished documentary footage setting the stage by interviewing friends, associates, and family members of Wall’s, and even including a bit of an “Unsolved Mysteries” segment on the real Devil’s Backbone, which is one of those areas some folks claim is haunted by numerous spirits. So far, so good, but if you thought the hikers wandering around aimlessly in the woods in BLAIR was boring, you’re really gonna’ need some NoDoz to get through this one.

As BLAIR WITCH proved, at least to those of us who liked the film, you can make a movie in the audience never actually sees much of anything and still have it be effective. We arguably see a bit more here, but writer/director Jake Wade Wall (who also stars as himself in the film) fails to make any of it interesting. Then again, maybe this is actually the perfect movie for today's audiences. You can easily check out to look on facebook, text your friends, or cook dinner, and when you check in again, it's like you haven't missed a thing. Those who actually want a film to keep them engaged throughout will be considerably less satisfied. Production values and performances are actually pretty good, but that doesn’t help much with a movie as boring as this one. 2 out of 4 stars.
Posted by Bob Ignizio at 12:00 AM