31 Days of Halloween 2015: Deathgasm (now in limited theatrical run and on VOD)

[31 Days of Halloween 2015: CRIMSON PEAK is now playing limited theatrical engagements and is available for sale and rent on various digital platforms.] 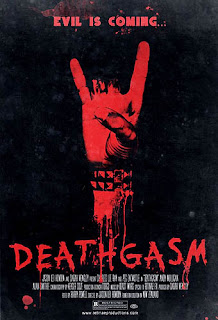 The laughs, gross-outs, and killer riffs fly at a furious pace in DEATHGASM, a headbanging horror-comedy from New Zealand. We see the story unfold through the eyes of teenage metalhead Brodie (Milo Cawthorne), who gets sent to live with his fundamentalist Christian Aunt and Uncle and their jock son after his meth-head mom is jailed for solicitation. The only bright spot is the killer record store in town, where Brodie meets fellow rivet head Zakk (James Blake). Brodie also makes a couple of friends at school, Dion (Sam Berkley) and Giles (Daniel Cresswell), a pair of role playing game aficionados who aren’t exactly at the top of the social  hierarchy. Brodie also takes notice of his cousin’s girlfriend Medina (Kimberly Crossman), but figures he doesn’t stand a chance with her.

The four friends start a metal band of their own, christened Deathgasm by Zakk, and proceed to make a racket in typical garage band fashion. Then one day Zakk takes Brodie to a seemingly abandoned house where they find one of their heavy metal heroes holed up and clutching a copy of an extremely limited album. Realizing that the teens have given away his location to the sinister forces looking for him, the aging rocker gives them the album and tells them to scram just before the bad guys show up.

Turns out that there’s some sheet music in the album sleeve that can summon a demon and grant the summoner incredible power, but Brodie and his friends just figure that it might be a cool tune to play. Not so much. Once they manage to play the whole thing, the gates of hell open wide and send forth demons to possess several of the townspeople. Now it’s up to Brodie and his friends to make things right, a task made considerably more difficult by the fact that Zakk is kind of an asshole.

Heavy metal and horror have long been intertwined. Black Sabbath, generally considered the first true heavy metal band, even took their name from the Mario Bava shocker of the same name. And in the eighties, just about every horror film had to have metal on the soundtrack. The few films to attempt injecting metal prominently into their storylines, however, weren’t exactly classics for the ages. Sure, THE GATE was a decent flick, but for the most part we got schlock like BLACK ROSES, TRICK OR TREAT, ROCK N ROLL NIGHTMARE, HARD ROCK ZOMBIES, and MONSTER DOG. Thankfully, DEATHGASM delivers the metal horror film that fans have been waiting for.

It’s very much apparent that writer/director Jason Lei Howden knows his metal. Brodey’s explanation of why metal is appealing is spot on, and while the movie isn’t above having a few laughs at the corpse paint and clothing modern metalheads sport, the characters are never portrayed as cartoonish. The soundtrack is also an ass kicker with wall-to-wall underground metal bands including Clevelanders Midnight and Nunslaughter.

Howden also clearly knows what metal heads want from a horror film. There’s Satanic imagery galore, a fair amount of female nudity, and not unlike fellow New Zealander Peter Jackson, Howden goes all the way when it comes to the gore. The effects are almost all done using old school practical methods, too. The only CGI I noticed were a few instances of extra blood being added into an otherwise practical FX scene (somewhat surprising given that Howden is part of the CGI team at WETA, the company that provided effects for THE HOBBIT movies, among others).
More importantly for general movie fans, the characters are memorable, the writing is sharp (if a bit juvenile and sexist on occasion), and the direction is fast paced and fun without being overly frenetic. Those who don’t like gore and gross-out humor need not apply, but if that’s your thing, this is the best horror comedy to come down the pike since DEAD/ALIVE. 3 ½ out of 4 stars.
Posted by Bob Ignizio at 12:00 AM