[31 Days of Halloween 2015: CUB, available on VOD and Blu-Ray/DVD from Artsploitation Films] 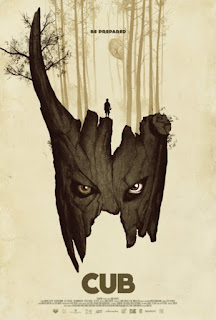 The film’s protagonist is 12 year old Sam (Maurice Luijten). Sam has evidently survived some kind of horrific family tragedy. As a result, he’s a little withdrawn and has a tendency to tell tales, but despite the ordeal his basic decency remains intact. Kids being the cruel bastards they often can be, however, many of Sam’s fellow scouts bully him, including one of the scout leader, Peter (Stef Aerts). The other scout leader, Chris (Titus De Voogdt), and the troop’s chef Jasmijn (Evelien Bosmans) try to look out for Sam, but they can’t always be there.

Things escalate after Chris and Peter tell a campfire horror story about a feral kid who lives in the woods named Kai. Sam believes the story, and not without good reason: there really is a feral kid running around in the woods, stealing little items from the campers. Sam some success making friends with the boy, but when he tells the other scouts he’s seen Kai, no one believes him.

Not only is the feral child (Gill Eeckelaert) running about in the woods, but so is his much more dangerous father (Jan Hammenecker). Turns out dad has set a number of deadly traps in the woods, and when characters start dying, Peter puts the blame on Sam, certain that the boy’s past has left him unhinged. But if anything is pushing Sam towards the darkness, it’s the cruelty of his peers and Sam.

Writer/director Jonas Govaerts has said he intentionally wanted the early part of his film to have a bit of a kid’s adventure movie vibe, ala THE GOONIES, and it does. But there’s always an aura of dread hanging over the proceedings, accentuated by Steve Moore’s throbbing synth score, that lets you know things are going to take a horrific turn.

There are probably a few too many Easter eggs referencing other horror films for CUB’s own good, and one wishes the characters and back story had been fleshed out a bit more – this is a rare film where I actually felt another 10 or 15 minutes might have helped. Still, overall it works quite well as both horror and adventure while also getting across its message that bullying and a lack of adult support can have dire consequences for an otherwise good kid. The way that plays out in the end is brutal, but also the only honest way the film could end. 3 out of 4 stars.
Posted by Bob Ignizio at 12:00 AM