[31 Days of Halloween 2015: CREEP is now available on Netflix Instant and VOD. Not on Blu-Ray/DVD as of this writing.] 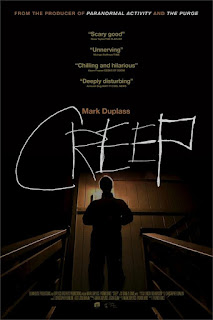 Down-on-his-luck filmmaker Aaron (Patrick Brice) answers a Craigslist ad to follow Josef (Mark Duplass) around and film him in CREEP, the new “mumblecore” horror flick from writer/director/star Brice and co-writer/producer/star Duplass. At first Josef presents himself as a dad dying of cancer who wants to record messages to his son for posterity, but it isn’t long before that’s revealed to be a lie. Josef claims he’s just a lonely guy looking to make a connection, but there’s something about him that’s just, well, creepy. But beyond needing the money, Aaron’s just too nice a guy to simply cut out on his employer despite his nagging suspicions that the guy is more than a bit off. Sometimes it’s not a good idea to ignore your gut instincts.

Like most films Duplass is associated with, CREEP is a minimalist affair. The cast is just the two actors (and one voice), the film uses only a few simple real-life locations, and the script is heavy on the dialogue and light on anything that might cost money. It’s a found footage movie in the vein of THE LAST EXORCISM or THE BLAIR WITCH PROJECT, but it makes those films’ production values look positively lush by comparison. But as countless indie horror films through the ages have shown, sometimes passion and creativity can turn limitations into assets.

Despite the found footage approach, the camera work in CREEP is quite good and clearly well planned to slowly dole out little bits of information. The film takes great care in ramping up both the suspense and the weirdness in such a way that the situations are tense but believable. The performances are convincing as well, with Duplass coming across like the dark flipside of the oddball title character from his JEFF WHO LIVES AT HOME. Only Josef isn’t some harmless idiot savant like Jeff.

While it may not be flashy, CREEP is a tautly constructed, well-paced little thriller that doesn’t overstay its welcome and makes an impact, and does it all on a tiny budget, to boot. With its minimalist design and not much in the way of action or violence, it’s probably not everyone’s idea of a fun scary picture. But for more patient viewers, it actually is both fun and, if not outright scary, at least disturbing and shocking. 3 out of 4 stars.
Posted by Bob Ignizio at 12:00 AM