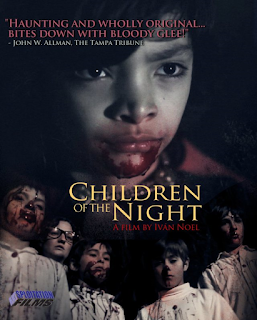 Some day I’ll really regret not giving CHILDREN OF THE NIGHT a higher rating. Ivan Noel’s Argentinian dark-comedy vampire flick has chintzy digital production values that come through glaringly even on the small screen. Yet it boasts an imagination quotient and wit higher than its budget. When a blockbuster $100 million Hollywood remake opens in the multiplexes (its pointless sequels already posed to compete with INSIDIOUS 4 MEETS LAST EXORCISM 6 in causing teen riots at the Cinemark Valley View), I’ll really, really miss the hominess of this original, which was concocted under the title LIMBO.

That’s the name of a curious rural orphanage outside Buenos Aries, visited by big-city journalist Alicia (Sabrina Ramos), in one of those roles that I fear influences too many of us to become underemployed journalists; she just sort of goes on the adventure and never seems at all concerned with deadlines or writing or stuff. Really, for much of the movie I thought she was a visiting nurse). Children at Limbo all suffer from a “photosensitive” disorder that keeps them dormant during the day, but fully active, healthy tykes, playing in the yard at night.


When Ana recognizes kids from old missing-children posters, and one face familiar even from her own childhood, she is told that, yes, these are all juvenile vampires, from toddlers to adolescents. Some are, despite appearances, many decades old. They were all bitten and exsanguinated at one time or another by irresponsible adult vampires (which, we are told, is an undead indulgence no different than mortal human gourmands eating veal). Now ageless bloodsuckers, the children are guarded and carefully raised in an atmosphere of sort-of-innocence, roughly according to Catholic Church strictures. Though encouraged to only drink animal blood – at first - they remain dangerous nonetheless.

But on the outskirts of the property lurks a black-clad squad of vampire-slaying grownups, and these folks, Alicia realizes, are worse. Fortunately, Limbo has a particularly powerful defender.

Sure, one could read themes into this of the notorious death squads endemic to South America, particularly urban Brazil, where grassroots militias are known to simply exterminate unwanted street children in Rio. But Noel’s heart is closer to cleverly updating and revamping the old gothic-horror notions. Even the legend of Dracula makes a juicy plot element, whilst Bram Stoker is dismissed as a closeted vampire who disguised his shameful origins via writing anti-vampire propaganda fiction. Noel’s two-hour plus running time is on the excessive side and could have been tightened a little, though I could sympathize with the idea that is his (voracious) baby and he couldn’t bare to trim it down.

If I were any sort of gentleman, too, I’d give bonus points for the casting of the late Argentine thesp Ana Maria Giunta as Erda, the matron and guardian of Limbo who schools Alicia in what’s going on. It’s a great part, and, as behind-the-scenes extras indicate, Giunta had to use a walker and was obviously in her last years when this was filmed; odds are the remake casts a barely-over-40 Hollywood actress in the same role – you know, such as Charlize Theron, an old bat like that.

The year 2015 has been a good one for me for catching up on home-video with off-the-wall vampires, with the knockout New Zealand mockumentary WHAT WE DO IN THE SHADOWS and the moody cultural mashup A GIRL WALKS HOME ALONE AT NIGHT, and my late imbibing of Jim Jarmush’s lyrical ONLY LOVERS LEFT ALIVE (not to mention the near-dead local economy pretty much sucking my own life away). LIMBO/CHILDREN OF THE NIGHT may just bring up the rear of that bunch, but it’s worthy of being mentioned in their company, and genre fans will drink it up.

Much as they’ll stand in line for a costly English-language remake whilst making small talk about how correct President Trump was to keep all those Latino types out of  the US; what could such brown-skinned people possibly have to offer? (2 3/4 out of 4 stars)