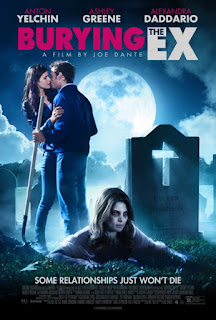 BURYING THE EX, the film itself is sadly disappointing, and even a bit misogynistic. Making it an even bigger disappointment is that it’s from director Joe Dante (PIRANHA, THE HOWLING, MATINEE, GREMLINS, GREMLINS 2), one of my favorite filmmakers. It’s not so much that Dante’s skills as a director have diminished, as it is that he’s working from a lousy screenplay by Alan Trezza, also one of the film’s producers. While horror geeks can have fun trying to find all the references to other films strewn throughout


BURYING THE EX is so gung ho to rip on Prius-driving, vegan-dieting liberalism that it forgets to be funny about it. The movie expects us to view Evelyn (Ashley Greene) as some sort of unbearable shrew, even though she’s actually pretty nice to her shlub of a boyfriend,  horror store clerk Max (Anton Yelchin). Her biggest crime is trying to get him to eat better and not being into horror movies as much as he is. Max complains about her to his bigger loser friend Travis (Oliver Cooper), but he doesn’t exactly put up much of a fight when the sexually voracious Evelyn makes herself readily and frequently available for hanky-panky.

Meanwhile, of course, Max runs into the perfect girl of his dreams, sort of a goth/horror fan variation on the Manic Pixie Dream girl trope: ice cream shop owner Olivia (Alexandra Daddario). She loves everything Max loves, but since Max can’t bring himself to man up and dump Evelyn, any possibility of these two dating will have to wait.

Well, it doesn’t have to wait very long. When she throws out some of his prized horror film collectibles, Max finally gets up the nerve to tell Evelyn he’s breaking up with her. But before he can do it, she gets hit by a car and dies. Ah, but there’s some sort of black magic at work, and before Max and Olivia can begin their new romance, zombie Evelyn comes looking for her man. And now that she kills and eats people, it’s even harder for Max to tell her they’re through.

The film isn’t completely devoid of fun, and as always with Dante’s films there’s the obligatory Dick Miller bit part to look forward to. But it's hard to root for our supposed hero to kill Evelyn (for good, this time) when, even in full zombie mode, she just doesn't come across as that villainous and unlikeable. In the end, though, the main problem with BURYING THE EX is that it’s just another mediocre rom-com that ticks off all the rom-com clichés in a totally rote manner. Just with zombies. 2 out of 4 stars.
Posted by Bob Ignizio at 12:00 AM