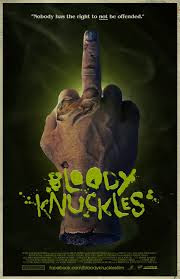 I haven’t heard much out of Troma lately, the great NYC-based production house and releasing entity for Lloyd Kaufman and his gonzo-gore catalog of titles, from the iconic TOXIC AVENGER to smaller indie acquisitions like the guilty pleasure I WAS A TEENAGE TV TERRORIST. That’s okay; Kaufman can take home a Life Achievement Academy Award (if he will stoop to that) and retire to New Jersey. He did well.

(But why do I have the sinking feeling that in a few years there will be string of big-bucks PG-13 remakes of Troma favorites such as the CLASS OF NUKE’EM HIGH series, probably from Disney? Kind of like how Wes Craven and John Carpenter sold out their heirloom properties in retirement? No, Lloyd, don’t do it, please!)


Very much in the spirit of vintage Troma comes Canada’s BLOODY KNUCKLES, from a rising bad-boy director who goes by the name Matt O (for Matt O’Mahoney). It’s a revisit to the disembodied crawling-hand subgenre of yore, reveling in ludicrous ethnic and gender stereotypes, and – like a Kaufman film – grafting an anti-censorship message into the thing with the subtlety of a bullhorn.

Actor Adam Boys does a slightly Bruce Campbell-ish turn as transgressive comix creator Travis, author of a grubby comic book called Vulgarian Invasions. His tasteless panels lampoon a powerful Chinatown crime boss and pillar-of-the-community businessman, whom police won’t arrest because of his bribes and political correctness. Outraged by the way he’s portrayed in Travis’ latest issue, the gangster has his hordes (all four of them, reflecting the budget) cut off the writer-artist’s right hand, as an example.

Travis withdraws into defeated self-pity, with a grotesque fake-hand prosthesis not unlike the one Woody Harrelson wore in KINGPIN. But his hand, tossed into a sewer, does not forgive or forget. Coming to mischievous life, the severed member tries to drag its unwilling former owner on a revenge rampage.

Every once in a while there’s a TV news report about an art exhibit being closed down for desecrating the (Canadian) flag, or an artist beheaded by jihadists, prompting a lengthy sidebar about freedom of speech and defending the indefensible. Yes, in disc-extra interviews, Matt O claims it was the uproar blaming terrorism in Libya over the anti-Mohammad YouTube video INNOCENCE OF MUSLIMS that inspired BLOODY KNUCKLES. Oh really? Then why not make a movie about radical Islam? Because I strongly suspect Mr. O likes to keep breathing, that’s why.

As much grandstanding and blarney-ish as its politics may be, the picture does have a zippy pace and an agreeably brief running time. And that decomposing, severed hand actually does convey a pretty funny ‘personality,’ or whatever you want to call it, even if a script contrivance leaves most of the plotlines heavy-lifting, as it were, to the arbitrary character of a gay guy in bondage-fetish gear cosplaying as a homo superhero.

Cult-horror fans should approve, nonetheless. For me, it’s a case of mostly (amputated) thumbs up, but I could have done without Matt O’s short subject ELECTRIC FENCE included on the disc, with its dare-you-to-look sequence of penis removal. Does that makes me a no-good-filthy censor? No it can’t; I’m not paid well enough. (2 1/2 out of 4 stars)