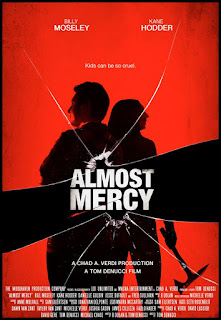 ALMOST MERCY is the story of two kids in suburbia who find friendship in each other - at least that’s what it thinks it is. Emily (Danielle Guldin), our main character and new kid in town Jackson (Jesse Dufault) become friends the instant they kill a bird together. Emily and Jackson hate everything except each other. Emily in her opening narration immediately refers to the world as a “shit hole.” These sentiments reflect the tone of the entire film.

Both Emily and Jackson are outcasts subjected to daily ridicule and bullying from kids at school. They endure days with seemingly the worst school staff on Earth and then go home to neglectful parents. Jackson in particular is victim to the absolute worst in society, the movie suggests that he may have been a victim of molestation at the hands of the priest.

As they grow older, their hate for the world grows. Both characters are surrounded by death, addiction and the tragedies of humanity. Do they have a reason to be angry? Sure, but their anger often seems misguided and they are totally desensitized. For example, a scene in which a fellow student (Tony) has his entire family murdered by the father (including Tony). Emily, who gratingly narrates the entire film, shrugs this off as fine with her because Tony was an asshole anyways.

This points to a major flaw of the film: The movie paints every single character as despicable and terrible, while at the same time trying to make Emily and Jackson look cool for their gritty view of the world. Except that it boils over. The “cool” duo goes on to kill people who have wronged them in any way (and I mean ANY way). Until the bitter end, the movie wants us to believe that Emily and Jackson’s crusade is justifiable and entertaining. No thanks.

ALMOST MERCY comes across as a college film whose writer/director, Tom DeNucci, believes all bad people can be clumped together as stereotypes. That perhaps there are simple reasons that mass killing should be accepted. As viewers, we must reject these notions.

Throughout ALMOST MERCY we are bashed over the head with an atrocious score that often detracts from the film. The performances are often cringe worthy. The dialogue comes off like a temper tantrum, like a 15-year-old whose mom just yelled at them decided to write a script.

ALMOST MERCY is not scary. It’s not haunting. It’s an hour and a half of totally random and lifeless story telling.  The point of ALMOST MERCY? The world sucks. There is no need an entire, poorly made movie to shake its fist at the world but offer nothing else of substance.
0 stars
Posted by Joseph Anthony at 12:00 AM