[TURBO KID is now available for rent or purchase on VOD.] 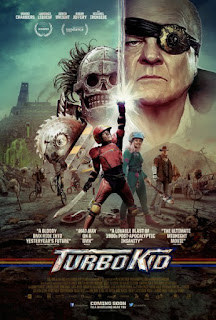 While there have been a number of homages that try recapture the cheesy magic of eighties and early nineties “B” movies (THE EXPENDABLES, KUNG FURY, HOBO WITH A SHOTGUN, etc.), none of them have fully lived up to their potential for me. Until now.

TURBO KID is about as perfect a riff on the eighties subgenre of really cheap ROAD WARRIOR knock offs as one could hope for. Recognizing that these kind of films are just inherently goofy, writers/directors Francois Simard, Anouk Whissel, and Yoann-Karl Whissel for the most part play it straight, only on occasion delivering obvious jokes. And if you think the idea of the whole cast riding across the post apocalyptic wasteland on BMX bikes is too over the top to have ever made it into a “real” movie, then you’ve obviously never seen such vintage classics as PRAYER OF THE ROLLERBOYS.

Set in the “future” of 1997, the premise of TURBO KID is that a young comic book fan (Munro Chambers) scavenges for items to trade so he can survive. Occasionally he even gets enough together to barter for an issue of his favorite comic book, Turbo Rider. Eventually the kid joins forces with a really upbeat female robot named Apple (Laurence Leboeuf) and the obligatory rough around the edges Han Solo type Frederic (Aaron Jeffery) to take on evil warlord Zeus (Michael Ironside) and his army of bike riding sadists, including Skeletron (Edwin Wright).

The film boasts plenty of violence and gore, but it never feels mean spirited or sadistic. It’s hard to explain if you’re not a fan of the films that inspired TURBO KID, but if you’ve ever watched and enjoyed BASKET CASE, THE TOXIC AVENGER, STREET TRASH, or the early films of Peter Jackson, then you know what I’m talking about. Call me crazy, but there’s just something about the inventiveness of low budget practical gore effects that brings a smile to my face. It makes it a lot easier to forgive the few instances the film has to resort to CGI.

This is also a rare “B” movie homage that gets the acting just right. No one is intentionally acting bad here. In fact, the cast are all quite good, and even Leboeuf’s cheerful persona is more ingratiating than grating. And Chambers, a Canadian TV star best know for long running roles on Degrassi and The Latest Buzz, does a great job portraying the sort of earnest hero that most films these days seem to regard as too corny for modern audiences. The Kid is certainly the butt of a few jokes, but the film never belittles his basic decency.

Special mention also needs to be made of the film’s soundtrack by Le Matos. As much as I loved the similarly retro music in KUNG FURY (and the David Hasselhoff theme song especially), the music for TURBO KID is even better and more spot on.

Really, I don’t have anything bad to say about this movie. As long as you’re in the market for this kind of schlock, it’s hard to believe you’ll be anything less than entertained by TURBO KID. I know I certainly had a blast with it, and it’s on the short list of movies from this year that I plan on watching again. It may not be a “great” film in the traditional sense critics use that term, but for what it sets out to do, it’s just about perfect. 3 ½ out of 4 stars.
Posted by Bob Ignizio at 12:00 AM