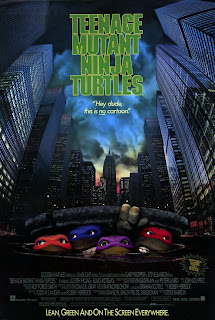 Andrew Sarris may have invented the Auteur Theory, Sergei Eisenstein the "revolutionary" style of film editing, James Cameron everything else. But me? My big contribution to cinematic thought? The Teenage Mutant Ninja Turtles theory. I hold that were it not for these campy cartoon characters, martial-arts cinema would have had to wait even longer than it did to get wide acceptance in the west. That's right, no CROUCHING TIGER, HIDDEN DRAGON, no Jet Li a household name, no Tsui Hark or Cory Yuen an idol to yankee-dog film students without Michelangelo, Donatello, Raphael, Leonardo and Splinter the Rat.


None who survived the late 1980s and early 1990s escaped the Teenage Mutant Ninja Turtles. The fighting foursome of goofy reptiles were created in a comic book by Kevin Eastman and Peter Laird and barely had time to become a `cult' phenomenon before they were fished up by ancillary marketers and peddled as aggressively as SpongeBob. There were Ninja Turtle videogames, books, towels, drinking glasses, action-figures and, of course, a cut-rate TV cartoon that modified their personalities, from Laird-Eastman's serious, teeth-clenched Bushido warriors to more playful surfer-skateboarder types ("Cowabunga, dude!") who loved to eat pizza.

It was inevitable a live-action Mutant Ninja Turtle Movie would be made, with actors in suits. Because of the sheer goofiness of the imagery, it sounded like one bad idea, dude (as had been HOWARD THE DUCK). But New Line Cinema wisely got some cutting-edge Muppetry by the Jim Henson Creature Shop, who succeeded in rubber Turtle costumes that were expressive and fluid - never mind that you still can't tell one Turtle from the other except by their mask colors.

What you must know is that back in those days, critics pretty much condemned all kung-fu movies, from Bruce Lee to Jackie Chan, as R-rated bloodbaths, fit only for the ghetto flea pits. Just the idea of a kids' karate property raised doubts (though the KARATE KID flicks were allowed to get away with it, go figure). The non-threatening Teenage Mutant Ninja Turtles and their 1990 breakthrough flick helped draw the kung-fu genre out of its shell, so to speak, into acceptable polite society.

The plot, as if you need to know: New York City suffers an unstoppable crime wave of petty theft that turns out to be the work of the Foot Clan, an army of runaway boys (and girls) who have been recruited into thievery a la Oliver Twist with martial-arts discipline. Their grownup leaders are a displaced mob of Japanese karate villains, ruled by a master called Shredder in what looks like a silver Darth Vader mask. Just for mentioning the crimes on TV, anchorwoman-reporter April O'Neil (Judith Hoag) becomes a target of the Foot Clan. She's rescued by a foursome of man-sized, talking, fighting turtles, dwelling in the city's sewers. These friendly mutants are former housepets granted superior size, strength and intelligence after exposure to radioactive waste. The same befell their guardian and `master,' a former pet rat named Splinter, who happened to learn Eastern philosophy and martial-arts from his deceased human owner and passed on these skills to the turtles - along with the names Leonardo, Donatello, Michelangelo and Raphael.

The heroes also hook up with another freelance crimefighter, Casey Jones (Elias Koteas), an ex-hockey player (in his own goalie mask he looks a little like Jason from FRIDAY THE 13th). The abundant martial-arts violence caused some controversy at the time (in Britain this "family film" was actually censored from children), but the once-criticized action in this Turtle soup is mainly martial-arts slapstick comedy - as long as it's the Ninja Turtles battling and making the baddies pratfall in not-so-mortal combat, and never drawing blood despite their swords and daggers. Note how director Steve Barron saves the really rough stuff and the bleeding for Casey Jones.

The movie was a huge hit - I think that after TEENAGE MUTANT NINJA TURTLES became a box-office hit the VHS was mass-marketed outside the usual domain of video-rental emporia, piles of the thing popping up even in grocery stores and gas stations, the first time I recall seeing something like that. And there was even a news item that some young kids were so Ninja-crazed that, under the feature’s influence, they had run away from home to the sewers, to try to live with the turtles.

So it's a movie that made its mark, all right, and from then on martial-arts movies were not automatically dismissed as being de facto on the social level of grindhouse softcore. But once you get past the triumph of f/x and commercialism, this Turtle soup, I have to say, is pretty thin stuff, with a basically A-to-B storyline, made compelling to me mainly by the way Splinter the Rat is by far the most noble character shown. As he tries to help Raphael beat his anger-management issue he's really a Yoda-like standout paragon of wisdom and kindness. You wish the movie were more about him. Rats never had such good PR.

So that’s my theory, and I’m sticking to it. You have a better one? Comment below.
Posted by Bob Ignizio at 12:00 AM