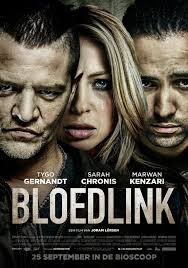 I don’t know how many of you saw 2009’s THE DISAPPEARANCE OF ALICE CREED. The UK thriller from director J Blakeson was a three-character suspense drama redux, in the tradition of Polanski’s KNIFE IN THE WATER, that dragged the viewer in to seductions, shifting alliances, and betrayals among a pair of kidnappers and their well-to-do female captive. I’d give it a strong recommendation, for viewers not put off by the sense of female victimization (yes, I’m a rather quaint 20th-century guy; audiences in the torture-porn era probably feel misled if an actress isn’t degraded).

Now, for those of who prefer Dutch-with-subtitles rather than accented English, there comes RECKLESS. No relation to the 1984 Daryl Hannah drama (or, for that matter, the 1935 Jean Harlow musical), Joram Lursen’s feature is a very near subplot-for-subplot remake of the 2009 DISAPPEARANCE OF ALICE CREED. Now done in the Netherlands (under the original title BLOEDLINK) its heroine is blonde (compare-contrast Gemma Atherton in the original), if that buys interest points.

But, unknown to both Victor and the victim, Rico is Laura's lover; when she grabs his gun and has him at her mercy, Rico reveals his identity. He has to do  some quick explaining to the enraged girlfriend that he set up the whole thing in secret, so he and Laura could flee together with money extricated from the clutches of her badly estranged father. In the process, Rico says, he plans cutting Victor out of the deal.

But is he telling the truth? Head-spinning second-act surprise reveals that [SPOILER ALERT THAT PROBABLY WILL BE LESS OF A SPOILER ALERT WHEN GAYS GET THE RIGHT TO MARRY; YES, AS IF GETTING MARRIED WAS EVER A GOOD IDEA IN THE FIRST PLACE]. Victor and Rico are homosexual lovers, hardened ex-con Victor taking the mastermind role in this caper and generally pushing Rico around. Naturally, Victor had no idea Laura and Rico already had a relationship. Whose side is Rico really on? And does Laura, though tied up (most of the time) have schemes of her own?

The shifting allegiances and sexual tension between the treacherous trio worked in the first movie like gangbusters. It’s still compelling here, though the decision to shoot much of the drama in shadowy murk (even end credits are hard to distinguish) does not so much convey noir as the need for a good light bulb.

Both versions are about the same level in nudity, violence and sensuality. The endings are slightly at variance; RECKLESS suggests one more twist of the blade in theme of dishonor among thieves and lying liars and the men/women who love them. While THE DISAPPEARANCE OF ALICE CREED did better at suggesting what was going to happen after the fadeout.

I guess for nail-biting ambiance and better-chosen camera angles, I prefer the original. Would I have felt differently if RECKLESS had come out first and ALICE CREED were the remake? It’s possible. You can’t trust anyone these days. (2 1/2 out of 4 stars)