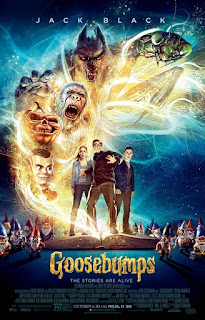 In celebration of the worldwide release of Goosebumps, in theaters October 16, 2015, moviegoers can put themselves inside an action-packed scene from the movie in a virtual reality adventure with immersive motion by D-BOX with the Goosebumps Virtual Reality Adventure.  In eleven cities over four weekends, Goosebumps fans can buckle up for adventure as Jack Black, playing famed Goosebumps author R.L. Stine, takes them on an unforgettable journey through town, just after his creatures have escaped from their manuscripts.


In the one-of-a-kind promotional event, moviegoers will put on virtual reality goggles and climb into a D-BOX immersive motion-activated chair to experience being inside a scene from the movie.  In the experience, which is inspired by a scene in the film itself, Jack Black, playing Stine, drives through town, trying to escape one of his creations, the Praying Mantis.  With the motion of the D-BOX chair precisely synced to action, Black directs viewers to look around and experience the world of Goosebumps, as if they were inside the film itself.  The experience was directed by Rob Letterman, the director of Goosebumps.

The Goosebumps Virtual Reality Adventure will be available for four weekends, Saturdays and Sundays between September 26 and October 18, in the following markets:

Moviegoers can visit www.Goosebumps-Movie.com for local theater location information.  The experience will be available in select international cities at future dates, tied to the film’s release.

Sony partnered with the globally renowned creative studio and VFX powerhouse MPC to shoot and produce the VR content.

Commenting on the announcement, Elias Plishner, executive vice president, Digital Marketing for Sony Pictures said, “Goosebumps is a fun, immersive movie, and this promotional experience is going to put moviegoers inside the film itself.  We’re always looking for ways to create engagement, and it was great to see Rob and Jack take the existing scene and re-shoot it for virtual reality.  They were completely game.”

Jake Zim, senior vice president, Digital Marketing, added, “The world of Goosebumps lends itself perfectly to VR, and merging the D-BOX motion chair with virtual reality takes this experience to the next level.  You’re going to feel immersed in the movie – it’s a virtual reality adventure ride right there in the theater lobby.”

Michel Paquette, VP Marketing, D-BOX added, “As the world leader and inventor of immersive motion for cinematic art, we are very pleased to see that the credibility in creating subtle and intelligent motion is adding embodied spectator participation to the storytelling.  We’re always looking for ways to expand the moviegoing experience, which is why we jumped at the chance to team up with the studio for this unique event.  We truly feel that the Goosebumps Virtual Reality Adventure elevates the viewer’s movie experience by combining VR with credible physical reality only available through the D-BOX chair.  With the immersive motion of that chair specifically programmed and synced to the VR images playing in the goggles, you’re going to feel like you’re right there in the car with Jack Black, trying to escape the Praying Mantis.”

In addition to and separate from the Goosebumps Virtual Reality Adventure, moviegoers will be invited to experience the theatrical film Goosebumps in one of the thousands of D-BOX seats installed in theaters upon the film’s release.