The Taking of Tiger Mountain (now on video) 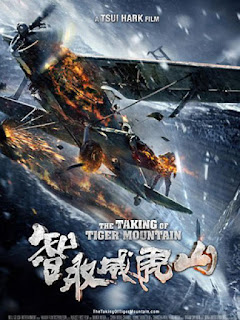 Remember Tsui Hark, anybody? Hong Kong/Chinese cinema's answer to Steven Spielberg? Hark came to western attention directing his dynamic, stylish Cantonese martial-arts actioners and wild fantasies such as A CHINESE GHOST STORY, PEKING OPERA BLUES and the motion-sickness-inducting ZU: WARRIORS OF THE MAGIC MOUNTAIN. He was already a living legend on home soil when he broke out in a big way (along with star Jet Li) with his epochal ONCE UPON A TIME IN CHINA (a film The Plain Dealer's critic in 1992 dismissed as drive-in trash, by the way) and its sequels.

Then Hark went to Hollywood with even less success than his equally influential countryman John Woo. Hark directed DOUBLE TEAM, which was supposed to launch Dennis Rodman as an action hero. I've actually heard semi-good things about D0UBLE TEAM, but the basketball-baiting gambit failed at the box office, and, as one might imagine, Hark went back home to China.

But so did most of America's jobs, industries and mojo. Hark has not stopped working, now with advanced CGI backing up his wire-stunt spectaculars. Maybe it wasn't Tsui Hark that failed in Hollywood; as China rises to superpower status, it was Hollywood that failed Hark-wood.

In any case, he's still an outstanding master of cinematic action. And, in the tradition of ONCE UPON A TIME IN CHINA, which rewrote the tale of lion-dance master Wong Fei-Hung in huger-than-life fashion, Hark has revisited old favorites in the canon of Asian storytelling.

His latest, TAKING TIGER MOUNTAIN, is a Hark-ening of a true-life tale that virtually every Chinese knows. The WW2 incident novelized famously by Qu Bo as Tracks in the Snowy Forest, and "As Taking Tiger Mountain by Strategy" it was a popular Peking Opera standard approved by Chairman Mao as one of the "eight master works," judged politically safe and positive enough to be performed in the Peoples Republic even during the darkest years of the Cultural Revolution.

The facts, as I gather from the internet (being an ignorant round-eyed foreign-devil barbarian - not that I wouldn't make a good employee when China takes us over) are these: around the end of WW2, a band of fewer than three dozen Communist Chinese soldiers took on - and defeated - a vastly more powerful force of heavily armed insurgent bandits. I've heard sums anywhere between 1,000 and 2,000 bad guys. The key strategist, Yang Zirang (who died not long after), has been a virtual folk hero ever since.

Here, with Marxsist idiological sermonizing deleted and the plot amped up with "bullet-time" gunfight sequences and digital f/x, Hark's version is more Marvel Comics than Maoist (sorry about that, Coventry Road liberals).

The setting is northwest China, in turmoil since the Japanese surrender. A local bandit chief calling himself Hawk (actor Tony Leung Ka Fei is styled like a humanized vulture, right out of the funny pages), has found a cache of advanced Japanese weapons and a seemingly impregnable Nipponese-made fortress on Tiger Mountain, raising him to warlord status, as most of the brigands in the area flock to join him.

It's done up as pure kinetic crowd-pleaser, although a modern-day bookending story involving a descendant of one of the PLA good guys is a bit puzzling. As generations of Chinese grew up with this yarn in one form or another, some of the finer points of the plot are assumed to be understood - there's a lot of talk about a rival warlord named Big Stick, whom we don't meet, that confused me quite a lot, for one thing.

Still, action is an international language, and Hark serves his fans up, as only Tsui Hark could, with a choice of two climactic confrontations with the nefarious Hawk, one being far more outrageously over-the-top than the other.

In short, TAKING TIGER MOUNTAIN is a super-sized blast. Try to watch it with a big screen and good sound system. And, if as some commentators think, the 21st century is going to be basically owned by the Chinese, then Tsui Hark may have lost out in Hollywood but he ultimately took his talents to the winning team after all. (3 out of 4 stars)