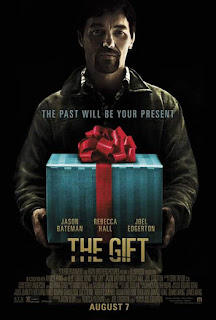 Although best known as an actor, Joel Edgerton has also been building a respectable resume as a screenwriter. He seems drawn towards genre films (neo noir with THE SQUARE, cop drama with THE FELONY, post-apocalyptic action with THE ROVER), but tends to subvert the conventions of genre as much as he embraces them. This makes for films that, at least by the standards of modern Hollywood, are interesting and original. No surprise, then, that Edgerton finds himself in similar territory for his directorial debut THE GIFT, which he also wrote, produced, and stars in.

The genre this time is the sort of domestic thriller popularized in the late eighties/early nineties by films like SLEEPING WITH THE ENEMY, UNLAWFUL ENTRY, THE HAND THAT ROCKS THE CRADLE and, more recently, THE BOY NEXT DOOR and THE GUEST. The film begins with a seemingly happy and successful married couple – Simon, played by Jason Bateman, and Robyn, played by Rebecca Hall – buying a new home. The house is near where Simon grew up, and while doing some shopping in town, an old classmate of his (Gordo, played by Edgerton) comes up to Simon at the cash register and tries to renew their acquaintance.

Before long Gordo is leaving an excessive number of housewarming gifts at his old classmate’s abode and, more disturbingly, showing up unannounced when Simon is at work to visit with Robyn. We all know where this is going, right? Well, actually we don’t.

Rather than follow the usual formula for the kind of thriller we think we’re watching, THE GIFT switches gears into something that strives to be more substantive and thought provoking. It turns out that in high school, Simon was a bully, and Gordo was on the receiving end of a particularly mean-spirited prank. And while he seems kind of odd and creepy, Gordo may actually just be looking for some kind of closure, closure Simon isn’t interested in giving him. Meanwhile Robyn starts to wonder just who is this guy she’s married to (and trying to start a family with), and when Simon refuses to give her the answers she seeks, Robyn starts doing a little digging of her own. The plot, and audience sympathies, will shift a few times before all is said and done.

As a fan of Edgerton’s previous work as both writer (in particular on FELONY) and an actor, I was really rooting for him in his first stab at directing. But while in principle I appreciate the way he plays with, and frequently thwarts, audience expectations. The execution, however, feels about as smooth as me trying to drive stick, which is to say the cinematic equivalent of, “if you can’t find it, grind it.” It’s also a bummer that, after having Hall’s Robyn drive the plot for most of the second act, the movie then sidelines her for the conclusion. Which would be bad enough, but the movie also raises a particularly troubling possibility more as a way of getting back at Simon than the assault on Robyn’s person it truly would be. Were this just a sleazy exploitation film that might not matter so much, but seeing as THE GIFT is aiming higher, it’s disappointing.

Given how critics, myself included, often gripe about the formulaic nature of so much that comes out of Hollywood, it feels a bit like looking a gift horse in the mouth to be too hard on THE GIFT, which if nothing else is quite a departure from the usual fare. But as much as one may admire what the film is going for, it just doesn’t satisfy. Those looking for a more traditional thriller will feel cheated, and those hoping for something more will likely feel shortchanged. I’m sure there will be those who like it more than I did, and if you’re fed up enough with cookie-cutter Hollywood fare it might be worth taking the chance. I just can’t quite recommend it. 2 ½ out of 4 stars.
Posted by Bob Ignizio at 12:11 AM